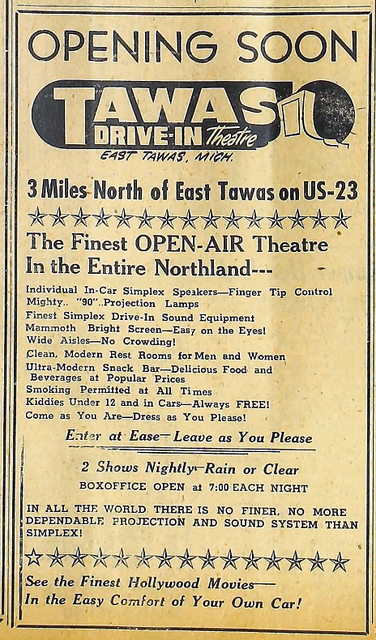 Located on E. US Highway 23 and Aulerich Road, 3-miles north of East Tawas, MI. The Tawas Drive-In opened on July 2, 1952 with Paul Henreid in “Thief of Damascus” & Judy Canova in “Hit the Hay”. It had a capacity for 350 cars. It was operated by Ashmun Brothers of Caro. The capacity was later expanded to 400 cars in the 1970’s. This single screen drive-in closed in 1991.

In 1993-1994, there were plans to build a Meijer store on the site, but it was canceled. A Presbyterian church was built on a portion of the lot ca. 1995, and a Citgo station in 1997. About 1/3 of the field remains unused; there is still a moonbeam light at the back of the lot, and the snackbar was still standing until 2005.

The Tawas Drive-In was the seventh known Michigan drive-in project completed by my grandfather Albert S. “Al” Johnson’s Johnson Construction Company. The drive-in was located at 2005 N. US-23 in East Tawas, Michigan. I’ve uploaded scanned copies of all nine of Al’s Kodachrome slides.

His slides include one image showing construction of the concession/projection building with what could be a flatbed well-drilling rig in front of it. This image was taken in March 1952.

The remaining slides were shot in July 1952. These show the project nearing its completion. Vertical tongue-and-groove knotty pine sheathes the concession/projection building doors and also covers the ticket booth.

A Jeep, used to set the precast speaker stands, is shown in one slide. A swing set can be seen in front of the screen. Child play areas, sometimes with benches or chairs from which their parents could watch over their children, were a common feature of drive-ins of the era.

More recent photos of the drive-in at the waterwinterwonderland.com website show that the screen had been widened at some point. The site also states that the drive-in was closed after the 1991 season.