Sliman Theater for the Performing Arts 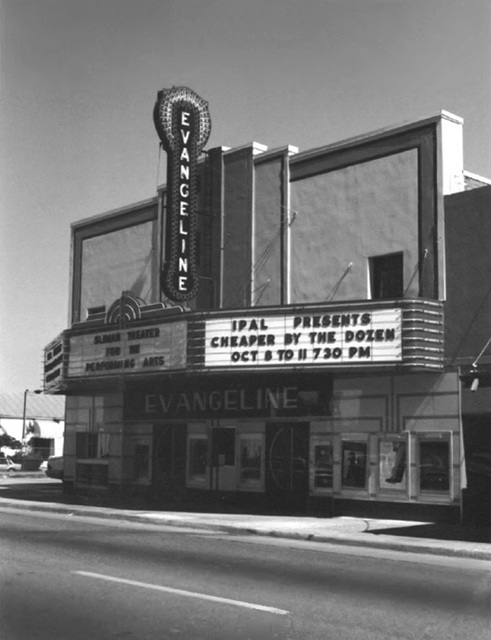 The 600-seat Evangeline Theater on Main Street, New Iberia was donated to the city in 1994 after its days as a movie house had ended by its owners, the Sliman family.

The Evangeline Theater was restored to its original Art Deco style appearance in 1997 and reopened in 1998 as the Sliman Theater for the Performing Arts. The theater is home to the Louisiana Crossroads concert series, which is presented by the Arcadiana Arts Council.

Listed in the Film Daily Yearbook; 1941 edition as the Evangeline Theater with 600 seats.

The Sliman family donated this theater to the City of New Iberia in 1994. State Representative Bo Ackal initiated efforts to acquire funding to preserve this “Art Deco” gem and restore it to its useful purpose for the community. As a result of these efforts, the City received a State Capital Outlay Grant in 1995 for the proposed project and work began in 1997. The doors of The Sliman Theater for Performing Arts opened in 1998, since then the theater has established itself as a quality venue for performance art.
It’s nice to see that some people still donate to worthy causes. Now the city has a live venue for generations to come if they can maintain it.

The Evangeline Theater started its life as a wholesale grocery building in the late nineteenth or twentieth century. Remodeled for a movie house in 1929, the building gained its current Art Deco faÃ§ade and other characteristics during a 1939/40 renovation. The two story brick building’s faÃ§ade is clad in stucco and pigmented structural glass.

The tall blade sign of this theater is prominently featured in the opening scenes of the 2009 film “In the Electric Mist.”

One film in the current Lifetime Christmas movie series, “Christmas in Louisiana”, purports to be in New Iberia. A number of scenes in the film actually include various views of the exterior of this theater.