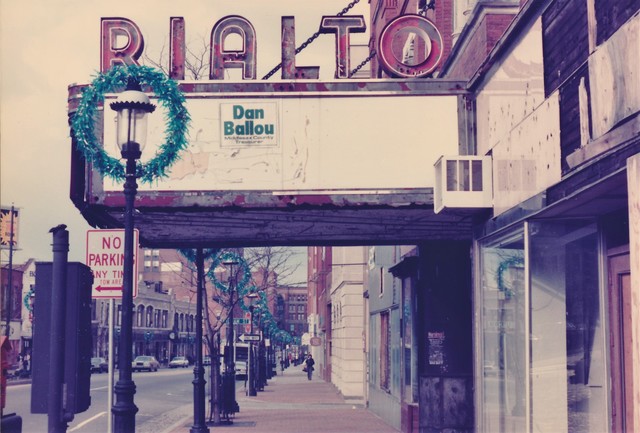 The Owl Theatre was opened in 1911 and was always a second-run house, but a good one. It was built in the train shed of the original Boston and Maine Railroad terminal in downtown Lowell. Supposedly part of its roof could be retracted for hot summer evenings.

It was renamed Rialto Theatre around 1920 and was later owned and operated by Norman Glassman who also operated the Crown Theatre on Middlesex Street and who built the Lowell Drive-In.

When it closed in 1960, its owner converted it to a bowling alley which thrived for many years. Under the auspices of the Lowell Urban National Park, the Rialto Theatre’s auditorium was torn down and the head house (which housed the lobby, ticket booth, and concession stand), was restored to its original appearance and now houses the Richard & Nancy Donahue Family Academic Arts Center.

Thanks Ron Salters, for that great facade shot of the Rialto(where I spent my early childhood film years) under magnification it’s clear that a stepladder has been placed by the marquee to either relamp under canopy lights or to freshen the current film titles which they were showing. Also there seem to be two workers standing next to the ladder.Many happy days spent here in the early 1950’s!

The Rialto is listed in the 1927 Film Daily Yearbook as having 1,100 seats and open daily.

When I was a boy in Lowell many years ago, Strand, Rialto and Keith’s were visited often. My father had worked in many of these theaters and also in Lawrence and further as decorator of the lobbies before litho posters were sent around with the films. I projected/tape recorded for Wilson Gill of Washingon D.C. years ago (his father was first theater projectionist in Wash D.C., and he, himself, at one time had been senior sound projectionist for Warner Bros. in Hollywood). I did 16MM arc projection at most major hotels in the capitol, and later, with this experience, was theater projectionist in Chatham on the Cape in early 70s. Had all the equipment from the thirties: Strong Arc, Altec Lansing tube sound (still the most reliable), and RCA-Brenkert heads. Rob Palmer

Always love to hear more news of the Rialto Th. in Lowell, does anyone have interior shot of same. I’ve looked for years ,but no luck. I’ll pray and leave the lights on!!!This was my first movie viewing at age 5.

The Owl Theatre opened in 1911 and during its run operator Samuel Orbach signed a contract with Paramount Pictures. By decade’s end, the Owl struggled and Orbach blamed Paramount for not getting the films to Lowell in a timely manner. The Owl closed and Orbach sued Paramount in Orbacj v. Paramount in which Orbach was found correct but couldn’t get the damages he sought. So new owners come in and change the theatre to the Rialto.

This building was scheduled to be open yesterday,May 11, as part of the “Doors Open Lowell” project. The blurb says “This High Victorian Gothic-style structure (1876) was originally built as a train depot but is more commonly known locally as the former Rialto Theatre up until 1960 when it was converted into a bowling alley. Discover how it has recently been spectacularly rehabilitated by Middlesex Community College and is now home to the Richard & Nancy Donahue Family Academic Arts Center.” www.doorsopenlowell.org