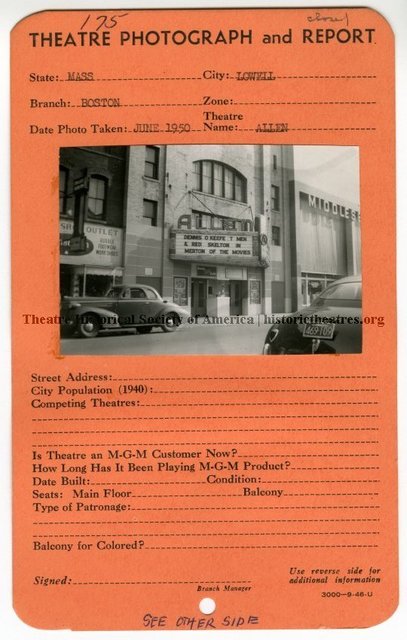 Always a second-run house, the Crown Theater opened in 1916 and closed in 1949, only to re-open as the Allen Theater. However this could have been a short lived venture. It was taken over by an electrical supply firm. The head house and triangular marquee still exist. I believe the auditorium has been torn down.

More great detective work by Mr. Roy…thanks!
First, Middlesex Supply: it was most assuredly where it is today back in 1951, and well before. By 1971 it did, in fact, undergo a major renovation, which will explain its greeatly altered appearance.
Second, there is no doubt in my mind that the 1929 shot of the Crown is the same building as the 1950 shot of the Allen, and is the same building which remains today. At first I was confused, but, if you strip away the facade of the 1929 Crown, what is left is the 1950 facade of the Allen, and that which remains today.
Third, I remain confused about how the Crown fit into the building which is there today. Did it fit entirely into that building (after all, it had only 800 seats), or was there another building involved (such as the rear of Middlesex Supply)? I wonder if the Lowell Historical Society could shed any light? I wonder if, at least, they might refer us to an old-timer who actually attended the Crown (I’m an old-timer who attended just about every other Lowell theater except the Crown/Allen!).

tto Prov. and Jim Roy- what casts doubt in my mind that the 1929 Crown is the Crown/Allen in Lowell is the height of both the theater and the building to its left. They are both one story shorter than what’s there now. There was a very fancy building to the right, where Middlesex Supply is now. Looks like it could have been a bank building, for example. We know that it’s a NETOCO theater because the sign above the marquee says so. The Crown photos were with some old NETOCO company photos of Boston neighborhood theaters, with no info about where it was located. Someone I know says that there was no Crown Theatre in Boston and the only Crown was in Lowell.

Boxoffice Magazine for April 28, 1958 has a feature article about Ben Sack and the Sack theater chain of Boston. Sack says that he got his start in movie theaters in Lowell. In 1950, with partners Irving Sisson and Joe Cohen, he began operating the Allen Theatre. A year later, the 3 moved to Fitchburg and after getting established there, they closed the Allen in Lowell, which Sack called a “dog”.

I was going by the place last night and noticed it all lit up. The Electrical Distrubutor place is now gone and the building is now operated as a gym to teach Karate, Mixed Martial Arts, Self Defence and Kun Khmer (Cambodian) Kick Boxing. I walked through it a little and they have a full size boxing ring in the area where the fron to the stage would be. After the theater moved out years ago they built a floor/cieling from the balcony to the rear wall. I was told there are still remnants of the balcony upstairs and was invited to tour the place some time during the day if I go back. Maybe this weekend.

The Crown in Lowell is listed in the 1927 Film Daily Yearbook as having 900 seats and open 7 days per week.

Further to the discussion of other theates named “Crown”, -in a list of theaters and halls receiving state licenses in MA as of Oct. 31, 1914, are Crown theaters in Amesbury and Everett.

This is the Crown Building I know I own it. I was my place of business till 2010 when I retired.

For sale on Loopnet

Here’s a copy of my letter to the editor of the LOWELL SUN:

I have read with distress about the current use of the Crown Theater Building at 74 Middlesex Street. I’d like to suggest that the city consider enabling the Crown to return to its original use: a theater.

The Crown’s history is mentioned at the web site: Cinema Treasures. It was never much of a theater…small, architecturally undistinguished, very small stage space…but it was, after all, a performance space, something we are sorely lacking in Lowell.

Opened in 1914, the theater had 900 seats on the floor and in a small balcony. By the 1950’s it had morphed into The Allen Theater before it closed in the 1950’s. It is entirely possible that most of the original interior exists underneath, behind, and above new construction done during the re-purposing of the building (as was done with the Royal).

Lowell very much needs a catalyst in order to establish a lively night life and aim it toward the performing arts, not the drinking arts. As our city continues its impressive and remarkable re-birth, moving from an industrial to a service economy, a rescued Crown could have significant impact.

Currently, there are two kinds of performance space in Lowell: huge and small, ranging from the Tsongas Center and Auditorium to Liberty Hall which houses the Merrimack Rep. And, I think we’ll all admit that Merrimack Rep. is absolutely jammed into Liberty Hall…no room for a decent stage. They do the best they can with what they have, but imagine certain of their productions given the space of a larger venue, such as the Crown. For point of reference, the Colonial, the Shubert, and the Wilbur theaters in Boston all seat about 1,700, so the Crown’s 900 seats would provide a workable alternative to Lowell’s current venues.

A restored Crown would have a positive economic impact on Middlesex Street, the downtown, and all of Lowell and its suburbs. There are many studies on the Internet, but check out those of the Theater Historical Society of America, which show the kinds of businesses which flourish in the shadow of a working theater.

Generally, a theater like the Crown comes back on line when concerned citizens take action. After forming a non-profit corporation to raise funds, to buy and restore it, the Crown would become a performing arts center. Future productions would sustain it. The list of possible tenants is impressive.

It seems ironic that of more than 20 theaters in Lowell, both small and great (again, visit Cinema Treasures for a complete list), all we’ve got to show in 2016 is the remains of the Crown. But we should be thankful we have that much. Imagine what we could do.

Although it said that the building was to be only two stories, this notice from the June 3, 1916, issue of The American Contractor was probably about the Crown Theatre:

It’s possible that the “2 sty” referred only to the auditorium, which had a balcony, or that a decision was made to make the head of the building taller before construction was complete. The March 11, 1940 obituary of architect Harry Prescott Graves in The Lowell Sun didn’t mention the Crown among his works, but did mention the Strand and Merrimack Square theatres. I’ve also found a reference to Graves designing a theater in Worcester in 1913, but I haven’t been able to identify the house.