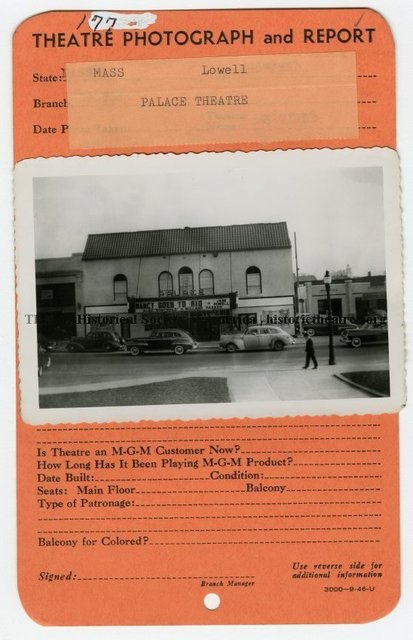 The Victory Theater opened October 23, 1927, with 1,200 seats. Another second-run Lowell theater, later known as the Palace Theater, it was anything but! When it closed, it was taken over by a car dealership. It has since been torn down.

The Palace in Lowell was included in the MGM Theatre Photograph and Report project but no one filled out the form or dated the photo. The exterior photo is of a rather wide free-standing building 2 stories high with 5 fancy windows on the second floor and what appears to be a tile roof. The small rectangular marquee has “Palace” across the top and a movie starring Jane Powell posted on it. To the right of the Palace there was either a side-street or a small parking lot. I suspect that this photo was taken circa-1950 rather than in 1941 like most of the others.

This was the second Palace Theater in Lowell. The first was at 312 Middlesex St. in 1906 which opened as the Parlor Theatre in 1899.
The Palace at 49 E. Merrimack St. opened as the Victory in 1928, became the Tower Theater in 1939, the L.G.M. Memorial in 1945 and finally the Palace in 1948. It operated until 1953. According to Nancy Tuttle of the Lowell Sun, it was owned by Norman Glassman and, for some of that period, was managed by Mr. Sokolowski. The theater’s marquee wound up over the vacant former showroom of Gervais Buick.

Here is the photo courtesy Ron Salters that he mentioned above.
http://www.pbase.com/jroy/image/123593260

The October 28, 1927, issue of Motion Picture News had this item about the opening of the Victory Theatre:

“The Victory Theatre, Lowell, held its formal opening Sunday and was entirely too small to hold the throngs which endeavored to attend. George Hammond is the managing director. The new theatre seats 1200 people and is located opposite the Lowell Municipal Auditorium.”

October 28 was a Friday, so the previous Sunday would have been October 23.