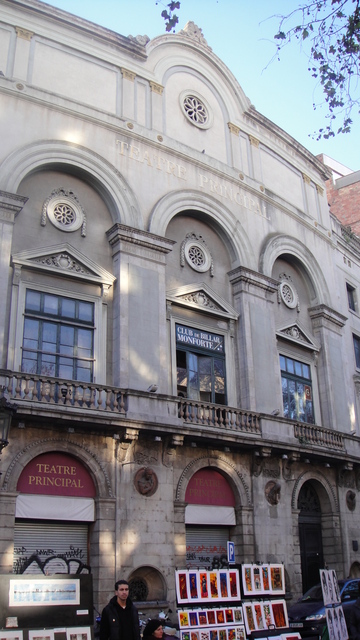 Located in the Ramblas area near to Barcelona’s old port the Teatre Principal was built in 1848 on the site of the earlier Teatre de la Santa Creu (1596-1788 when it was destroyed by fire and rebuilt). The 1848 building was designed by architect Daniel Molina as a live theatre.

It presented one of the earliest motion picture shows on 6th June 1896. It was converted into a full time cinema, known as the Principal Palace on 7th March 1919, with a seating capacity of 1,600. In 1936 it was turned into a recruitment center for fighters in the Spanish Civil War. On 17th September 1939, there was a slight change of name to Principal Palacio. On 24th April 1943 a 490 seat cinema was created within the building and it opened as the Cine Latino, with the main auditorium continuing as Principal Palacio.

On the 10th September 1979 the main auditorium, now known as Screen 1 with 991 seats opened with Roger Moore in “Moonraker”. The Cine Latino became the Principal Palacio Screen 2 with 400 seats and opened with William Shatner in “Tarantula”. Now newly refurbished, the interior decorations were carried out by Antoni Bonamusa for the then owners, the Balana group.

Since then, following a period of closure it has been renovated and reconverted back to live theatre use, although occassional film screening are held here during the Barcelona Film Festival.