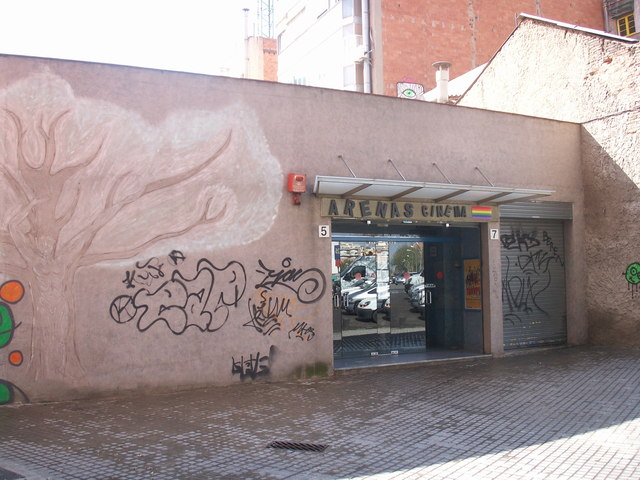 Located close to the Barcelona Bull Ring and the Placa, the Cine Arenas opened on 25th December 1928 with a triple bill programme “The Blue Danube”, “Amores de Ninos” (Loves of Children or Children of Love?) with Laura La Plante and “Sombras en la Noche (Secrets of the Night-1924) with Madge Bellamy. It had a seating capacity of 1,500. The main entrance of the cinema was located at Carrer De La Creu Coberta 22-24.

On 28th February 1929 it staged the first of many variety shows and on 5th July 1930 a Festival of Opera was organised with artistes from the Theatre de l'Opera Paris appearing.

It was renovated in 1943 and was taken over by the Balana chain. In later years, during the 1960’s, the programming tended towards sexploitaion films. On 4th November 1990, it suffered damage from a small fire caused by the heating system.

In around 2003, the original main entrance was closed and the foyer and possibly part of the original rear of the auditorium, is now in use as an Outlet sports shop.

The Arenas Cine Gay had its own large licenced bar and games room and was very popular. Despite this it was closed in 2015, and was demolished in November 2015.

sadly closed in 2015 and in the process of being demolished Nov 2015 – see photos, far too valuable a prime piece of land

I have a moving experience of the cinema Arena. When I discovered it in 2011, I could not believe it: a real old-fashioned cinema, the period scene, the tinned armchairs, the immense hall … considering the all too rare spectators, I was under the spell that I had to hurry to visit and re-visit this magical place. In addition, a real quality film was projected with the halo of blue light and the characteristic sound of the projection device. And this ticket, tiny piece of yellow card, that we were given a box! I thought while seeing and discussing with the spectators: to say that they knew the time of Franco and the pesetas! Finally, they were lucky Barcelona: certainly, homosexuality was repressed but at least they had this place extra-ordinary, grandiose, fairy. Every year, 2012,2013, 2014,2015 I was eager to go. Given the meager entries, I guessed that one day or another such a site, yet full of history and memory of the Barcelona of the past years, would faint. Yo be sad. “Do you like them?” They asked me. And I reward them, in my way, to thank them for having worn this gay cinema so many years. I must have rewarded gigolos too. Lady! The entrance fee was 9.50 euros. They needed a good return on investment, I understand. While in France, such cinemas have not existed since the 90s, the tolerant Catalanyua, who knows what suffering means, could boast of a tiny but symbolic place of plurality and happiness male. Arena was able to perform, mezzo voce, its regulatory social function: they were legion men wearing a ring on the left ring! Then, adios, adios the Arena and its sober and discreet staff, adios to the twenty rows of uncomfortable seats, adios to the definition to place razon misma of the vida. adios, adios, Barcelona. May you still cherish all your children, wealthy or modest, from Montjuic to Nou Barris. Adios Barcelona, ​​your story is watching you. Adios, hasta nunca. ()