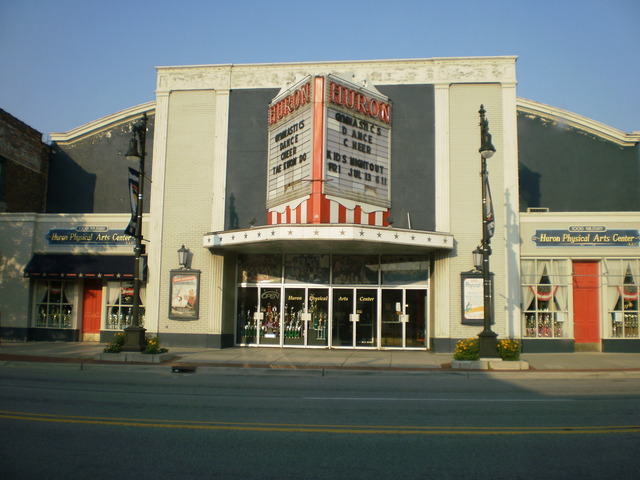 Opened as the Desmond Theatre on July 26, 1922 seating 1,350. Later was remodeled in an Art Deco style and was renamed the Huron Theatre. It ran until 1990 when it was bought and closed by GKC Theatres. It was later converted to a gym.

In response to the above comment, if you find the term “tacky” derogatory, I apologize. That photo is mine, on my Flickr page, and was never intended to be posted as a link on a greater site such as Cinema Treasures. I feel that since said photograph is mine, I have every right to describe it with whatever commentary I wish. I have used far more extreme descriptors than “tacky” in my years with labeling theater photographs, and if you find such an adjective insulting, so be it. I was merely comparing the building today with historical photographs from WaterWinterWonderland.Com.

The former theater is now the Huron Physical Arts Center.

The URL of the Huron Physical Arts Center is http://www.hpackids.com/

The 1940 Mickey Rooney film “Young Tom Edison” had its world premiere at the Desmond. A photo of the event as well as what the Huron looks like today can be found at http://www.classcreator.com/Port-Huron-MI-1961/class_custom3.cfm

The July 31, 1922, issue of The Film Daily reported that the finishing touches were being put on Herb Weil’s new theater at Port Huron and the house would soon open. Weil had entered the theater business in Port Huron in 1917, and by 1919 controlled all five of the town’s movie houses.

Weil was planning to build the new theater in 1919, but suffered setbacks that delayed its construction until 1922. When the Desmond opened he still controlled the Family Theatre, but the town’s leading theater, the Majestic, had come under the control of W. S. Butterfield in 1920.

This item from the April 5, 1919, issue of The Moving Picture World notes Herb Weil’s intention to build a large theater in Port Huron:

“ONE of the most popular exhibitors in Michigan, among both exchange managers and exhibitors, is Herbert L. Weil, who now dominates the theatre situation in Port Huron, Mich., by controlling 100 per cent, of the houses there.

“About three years ago he got the ‘bug’ for theatricals, and his first venture was leasing the Majestic Theatre, which was then playing legitimate attractions exclusively. But it wasn’t long before he saw the big possibilities of pictures, so he changed the policy of the theatre and installed motion picture equipment, which was his start in the picture field.‘ His next step was leasing the Bijou. Later he took over the Maxine, then the Family, and just lately he took over the American, giving him 100 per cent, of the theatres in Port Huron. The Majestic seats 1,500; the Family, 800; the Maxine, 500; the Bijou, 500, and the American 500.

“Mr. Weil is now having plans prepared for a new motion picture theatre project that will cost $150,000.

“He does all of his own booking, being a weekly visitor to Detroit.”I haven’t yet discovered what became of the Maxine, Bijou, and American Theatres.

An item about the Desmond Theatre appeared in the November 26, 1921, issue of The American Contractor:

December 7th, 1979 grand opening ad as a twin also in the photo section.