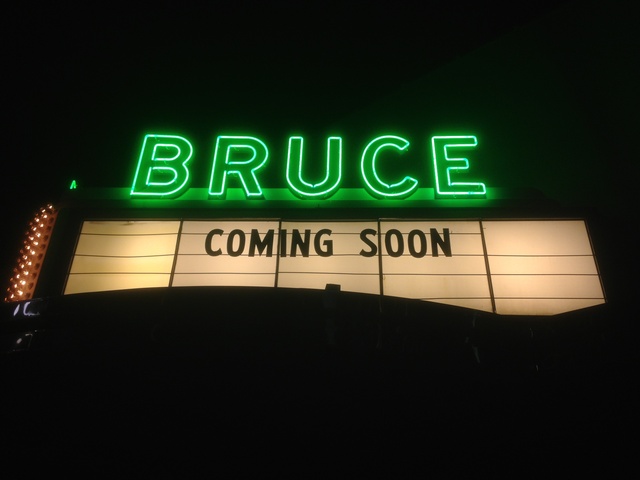 The single-screen Bruce Theatre, which opened around the late-1940’s, was closed in 2012. Renovatins were being carried out in 2016.

Construction of the BRUCE Theatre began on September 14, 1946 with Fred Conover, a local contractor, erecting the theatre with local labor over that fall and winter through a period of six months.
Grand opening of the New Bruce Theatre was on Easter Sunday, April 6, 1947 with the feature “Without Reservations,” starring John Wayne and Claudette Colbert.
H. E. Zielke of Hawkins and son Robert F. Zielke of Bruce were the owners and aso had a theatre in Hawkins beside Bruce. Bob Zielke was the BRUCE’s first manager.

TWO COMPLETE STAGE SHOWS 8:00 and 10:00 p. m. Bruce Theater TUESDAY – JUNE 20 The Chippewa Valley Barn Dance Show is headlined by two popular radio stars, Maggie and Scotty, who have been in the entertainment field for the past fifteen years. They have appeared and worked over WRFW in Eau Claire; WJMC in Rice Lake, Wisconsin; WEBC in Duluth, Minnesota; WENR in Chicago, Illinois; KSO in St. Paul, Minn.; and are presently making their headquarters in Eau Claire, Wisconsin, where they appear and entertain daily over WEAU. They point with pride at their Chippewa Valley Barn Dance Show which features such personalities as Jerry Wright, champion fiddler; Ronnie Champion, trick yodeler; Barefoot Bob Smith, the boy from Georgia; and many others.

LouRugani-Great info! Thanks for sharing. Do you know who currently owns the Bruce Theatre?

The theatre is under going renovations. The marquee has been restored with all neon and chaser bulbs replaced. Not sure on a re open date yet—but close!