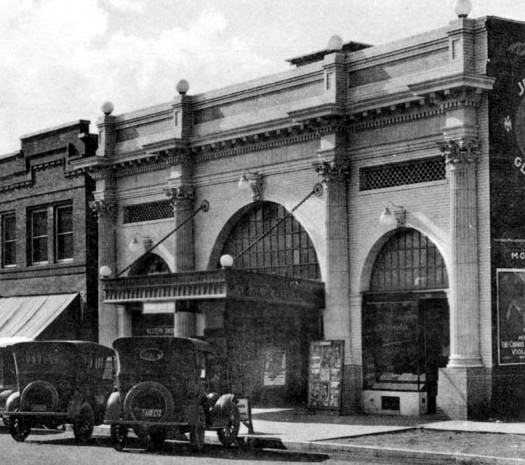 This early Glendale theatre was built by Henry C. Jensen, who would later build the more palatial Raymond Theatre in Pasadena. The Neo-Classical style building was designed by architect Robert J. Kitts. Construction on the Palace Grand Theatre began in August, 1914.

After being operated by Jensen for several years, by 1923 it had been renamed the T D & L Theatre, operated by the Turner, Dahnken and Langley Company, which became the basis of the Fox-West Coast circuit.

I have not been able to find out how long this theatre operated, but after after T D & L. it became the Lincoln Theatre. The entire block on which it stood has long since been redeveloped. It may have closed as early as the 1930’s.

Architect should be Robert G. Kitts, as noted in the introduction.

The architect’s correct middle initial is “J”, rather than the “G” which I wrote in the introduction.

Here is the web page for architect Robert J. (not G.) Kitts at the Pacific Coast Architecture Database. There’s no biographical information, but three of his other projects are listed. The Internet is sadly lacking information about him.

The Palace Grand is the isolated building on the left in this 1915 view of Brand Boulevard north from Broadway. A sign for a jewelery store has been painted on the side wall.

Here’s another source of the LAPL photo that Ken linked, only this one can be blown up to see detail. You can see “PALACE GRAND” on the marquee, and Jensen’s name on the side of the buikding. The poster is for “The Chorus Girl’s Romance, starring Viola Dana, released August 1920.

A Glendale movie house called the Lincoln Theatre was mentioned in the June 2, 1928, issue of Exhibitor’s Herald & Moving Picture World, and Cinema Treasures contributor BillCounter found the Lincoln listed in a 1928 telephone directory with the address of 129 N. Brand. That would be one of the storefronts adjacent to the Palace Grand’s entrance, so Lincoln Theatre must have been a late AKA for the Palace Grand. The operators might have been using the storefront as an office for the theater.

I don’t know in what year the name Lincoln was adopted. The West Coast Theatres circuit was formed in 1920, and bought the holdings of the Turner, Dahnken and Langley circuit in 1923, by which time the Palace Grand was known as the TD&L Theatre. C. L. Langley continued with West Coast as a partner in several theaters in Glendale, Pasadena, and perhaps Orange County, and built the Alexander Theatre in Glendale in association with West Coast in 1925.

It’s possible, and even likely, that Henry Jensen retained ownership of the Palace Grand building, and that Turner, Dahnken and Langley operated it under a lease. After building the Alexander, West Coast-Langley Theatres might have simply let their lease on the Palace Grand run out.

“The Palace-Grand Shops, also known as Jensen’s Arcade, was completed in 1923 and featured a drugstore, jewelry shop, and post office, along with one of Glendale’s most cherished historic businesses, the Egyptian Village Café. The basement, called the Glendale Recreation Center, had a barber shop, billiards hall, and bowling alley. The Arcade was built on the site of an earlier Jensen development, the Palace Grand Theater, an early vaudeville and movie house that was built in 1914 but forced to close in 1920 due to competition from the more modern Glendale Theater.”

More likely, 1920 was the year the house was renamed the TD&L Theatre. This ca.1925 photo (previously linked in my first comment on this theater) shows the TD&L sign on the building, and next door is a two-storey building with what appears to be a large set of skylights covering much of the roof. That neighboring building must have been the Palace Grand Shops, AKA Jensen’s Arcade, built in 1923. It’s possible that, after the theater closed, probably in 1928, its building was incorporated into the arcade, but the theater was definitely in operation through most of the 1920s.

I’m not sure where the address in this listing came from, but the 1917 Glendale city directory has the Palace Grand listed at 319 South Brand Blvd.

There are photos of the building at 129-131 North Brand with both theater names on it, so there’s no doubt that the 1914 Palace Grand become the TD&L sometime in the early 1920s. Unless the 1917 directory also has a theater with yet another name listed at the North Brand address, it most likely simply got the Palace Grand’s address wrong.