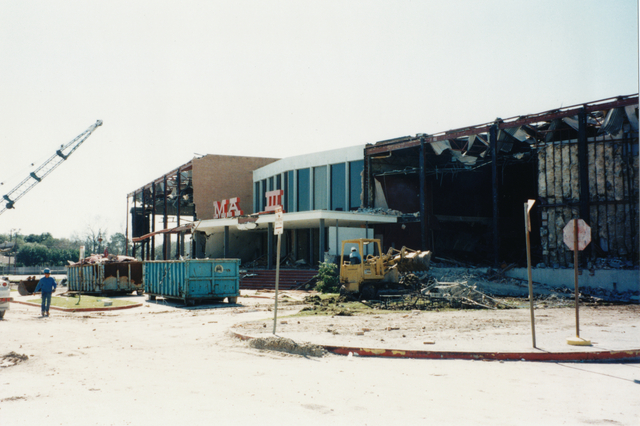 Although there were at least three other General Cinemas two-screen complexes with the same “butterfly” design (e.g. the Northline and the Gulfgate cinemas) the Meyerland Plaza Cinema I & II was the only of the lot to survive the auditorium splitting of the 1970’s and 1980’s. The proprietors of the Meyerland Shopping Centre allegedly had a rider on the GC contract stating that at least one of the theatre’s two auditoriums must remain intact. It opened on April 14, 1965.

Whatever the reason, the “un-twined” auditorium was one of the top five spots to screen a flick up until the early-1990’s. By then AMC had opened a 14 screen multiplex nearby in Meyer Park and GCC needed more space to compete. It was closed on January 15, 1995 and was demolished. It was replaced by the GCC Meyerland 8 (which has its own page on Cinema Treasures)

I work at the Meyerland Cinema staring in May 1970 with the opening of MAS*H. It was one of the best jobs even though it did pay much. I startes out at $1.00/hr. I worked as usher, doorman, cashier and concessions.It was a great place to meet people.

We had a World Premier of Catlow.You Brenner came and was a great guy

The concession prices were

The AMC 14 in Meyer Park, the nearest competitor – about 5 minutes drive from Meyerland Plaza, closed in 2007.

The Meyerland Cinema I and II was being designed by Boston architects William Riseman & Associates, with local architect Thompson McCleary associated, according to a Boxoffice Magazine item of July 20, 1964.

William Riseman designed many multi-screen theaters for General Cinema and other companies during this period. It’s likely that all the “butterfly” style twins GC built at the time were Riseman’s work.

I was at the last showing of the meyerland general cinema 3 . the film was interview with the vampire sunday evening sunday jan 15,1995. after the film I went over to talk to the manager mr potter to thank him for providing a great film that night. Being the last night of the cinema I gave mr potter some newspaper clippings from the houston post showing the opening days ads for april 1965 -marry poppings and mister moses. also a couple of dec 1968 ads for planet of the apes. I spent my childhood in that theatre. Enjoyed a lot of films there like the bible, wait until dark, the war wagon,the jungle book ,skyjaced. It was great place to see a film because the screens had a shadowbox effect with light blue lighting and soft music. Before each film they would show the company logo with blue background with a white projector turning then stopped to spell the letters comming attractions then after that they showed a loney tune cartoon then the movie would start.most Most movies back in 1966 cost 60 cents. All i can say is this was my favorite theatre. I am sad that it no longer exist. Just wonderful memories of this great general cinema theatre.

If you want to see the general cinema corporation-feature presentation-1977 film go to you tube.com and under search punch in the above company name the film runs 28 seconds and has the henry mancini drum sound from 1962. also to view the two film versons from the late 1980s general cinema candy band trailer -one runs from 1.14 seconds and the other 58 seconds. these general cinema films brings back good memories as a kid growing up.

Great memories here. Last film I saw there was “Yentl.”

When I moved to Houston in 1999, this was the very first movie theater I went to (for a showing of the remake of THE HAUNTING), since it was not far from where I lived. I also recall seeing the 2000 release of the restored version of THE EXORCIST there, and also MONSTER’S BALL (2001). Although the auditoriums were not especially impressive, they were decent, and I enjoyed going to this theater. I was actually rather shocked and saddened when I learned it was closing and would be demolished. Although I hadn’t been able to see movies there in its heyday, it was still a nice little multiplex, and did not deserve to be torn down.

The 8 screen was actually a complete new build, it was not built inside the shell of the 3 screen. You can verify this by looking at old satellite images on google earth.

The Meyerland three-plex was a profitable venue during General Cinema’s halcyon days of twins, tris, quads, and assorted other multiplexes. The GCC Meyerland Plaza reached its 30-year leasing with aplomb serving legions of customers. Its genesis is within the original Meyerland Plaza Mall Shopping Center that had opened theatre-less on October 31, 1957 with a Meyer’s and a Henke & Pillot as anchors followed by a Woolworth’s. As a portent of both good and bad times to come, the Plaza would add retailing chains including Service Merchandise, Venture, Borders Books, Palais Royal and - on a nearby outparcel - Kmart. All of these players, of course, were ingredients for retail highs and incredible lows as each would race toward obsolescence.

The General Cinema Meyerland Plaza Cinema I & II launched April 14, 1965 with “Mister Moses” with Robert Mitchum and Carroll Baker. Mitchum would make the trek to all three new Houston twins in support of the film. The Meyerland venue would become a triplex remaining profitable. But the Meyerland Plaza Mall would go into free fall as 20-, 25-, and 30-year leases reached expiry. The Plaza saw a major exodus of retailers in the 1980s as it reached “greyscale” status, a term akin to a dead mall featuring a completely desolate open air center courtyard. The yard’s trees had reportedly matured without enough care - a symbol of neglect for the Meyerland.

The 1980s / 1990s story of the Mall was very much a cautionary tale of that period for Houston. The Plaza had been owned by a single entity but then became a labyrinth when the property was divided up amongst several major players in the early 1980s. It all seemed to be an exercise in futility with the center in freefall, an economic downturn due to issues and unemployment within the oil industry, and a savings and loan crisis. The Plaza’s players couldn’t make their payments and Meyerland next ended up in the hand of two financial institutions on default: Continental Savings and Loan and Lamar Savings. Perhaps fortuitously, during the savings and loan meltdown, both of these entities were dissolved as insolvent. The bad news was that the center languished terribly with no upgrades and lots of deterioration over a seven-year stretch.

GCC was likely in the best shape of the occupants (along with the center’s booming video game arcade) as the theater was still booking good films and drawing crowds. General Cinema was undoubtedly going to opt out at its 30-year expiry in 1995 so likely just wanted to wring each dollar it could at the dying plaza. That plan changed in 1993. A single entity, Wulfe & Co., was able to untangle to labyrinthian ownership, liens and assorted legal issues plaguing the Meyerland. Architects Hermes & Reed along with Ray Bailey would take the Meyerland Plaza back to relevancy in 1994. In that stunning redevelopment would be the razing of the GCC Meyerland Plaza I, II, III which would be replaced by an 8-screen General Cinema’s multiplex. The three-plex closed January 15, 1995 with demolition occurring soon thereafter.

The replacement 8-screen GCC Meyerland 8 has its own CinemaTreasure listing. And the regional retail Meyerland Plaza would become relevant once more. But - spoiler - the new theater doesn’t have a happy ending as GCC should have gone much bigger there and everywhere else failing to adapt to the multiplex world of the mid-1990s. The new facility would be operated by three circuits before being demolished all within ten years.