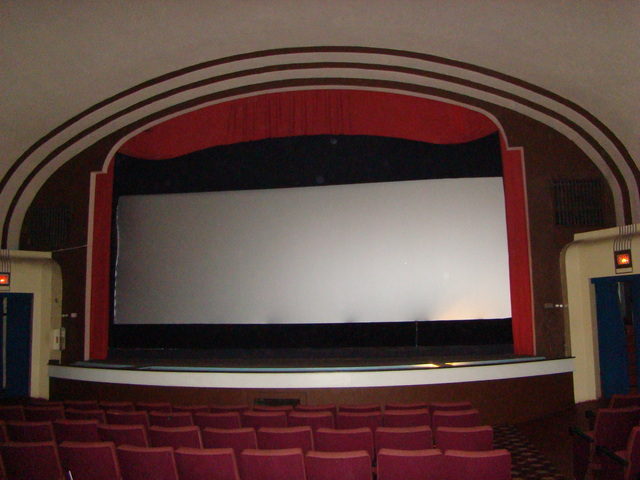 The Art Moderne style Bay Theatre, located on Main Street at 4th Avenue is situated not far from Chequamegon Bay, for which it is named. The once single-screen Bay Theatre, which originally seated 650, has since been divided into four auditoriums, but still remains in operation as a first-run movie house. It also still retains its spectacular Moderne-style marquee and vertical sign which dominates the facade of the otherwise nondescript two-story building.

The 1998 film, “A Simple Plan”, was filmed around Ashland and the surrounding area, and had its premiere at the Bay Theatre. The theatre is also featured in a 1991 painting by Davis Cone, which can be viewed in the book, “Popcorn Palaces”.

In 2007, two additional screens were made from adjoining buildings.

Here is another photo:
http://tinyurl.com/qrf9n

The Bay Theater is actually a 6 Plex now. I just discovered this theatre this month while in Ashland on business. They expanded into 2 neighboring buildings. I hope to see a movied there this week. Love the old theatres! Especially ones like this on Main Stree in a historic downtown. I have current pics, if anyone is interested

When I was a student at Northland College (mid 1970s) the Bay saved my sanity MANY a time! It was the ONLY source of first run stuff east of Duluth.

Among first runs I saw there… THE EXORCIST THE GODFATHER THE GREAT WALDO PEPPER BATTLE OF BRITAIN (tho that one was really a re-release) GONE WITH THE WIND (ditto, obviously).

For a Chicago city kid stuck in the Nort Woods for the first time, the Bay was like a lifeboat!

I have a copy of the Davis Cone book, He is from Augusta,Ga. and grew up in the same movie houses he did. A great artist and book.

The Art Institute of Chicago has a great photo of the Bay in its collection: http://www.artic.edu/aic/collections/artwork/104198