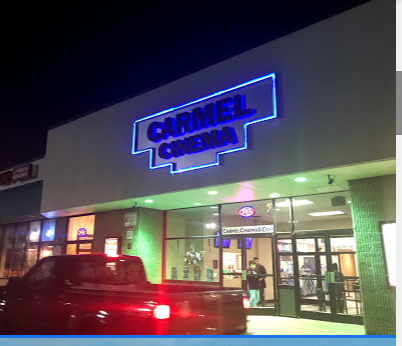 Carmel Movieplex 8 is located in the Carmel ShopRite Center. It opened on July 28, 2000 and was operated by Cinema North Corporation until October 2009. This theatre has eight screens, stadium seating and shows first run movies.

Those “suitcases"as they are refered to (which I personally HATE) being left out is so the film delivery people who have keys can come thru the night to pick them up. This is how its been done for 80 years.

This article indicates that the theater has a new operator:
View link

The Cinema North chain of Vermont were there untill cash problems occured & the doors closed. The theater was in need of theater & seat repairs also equipement repair and upgrades which were done during the closed period. It is now Carmel Movieplex 8 and has 1116 seats total for 8 theaters. Theaters #4,5,6 are the 80 seat capacity & is were the older films play after being in the larger #1,2,3,7,8 theaters. Vintage style projectors are in use there at present with new lamphouses. It should be noted that the theater is of a contempoary style & is still undergoing renovations and upgrades during the closed hours of operations. As for films in the lobby with cameras watching & still inside the building under lock & key..that is typical of alot of theaters..you still need at least $40,000 worth of used projector gear with some kind of audio system to play it! Theater has been at that location for some time as the overall appearence looks to be from 80’s -90’s. The only carving seen is the one in front of the Mexican restaurant next door, good service after a movie .

Anybody knows if anybody took over operations

New screens,new masking, digital projectors & sound systems ! New wall materials & paint along with a impressive concession. Pictures were crystal clear , sound was quite impressive, I am not sure if it was THX certified but did sound like it. There must be new management as the place was very clean & seemed well taken care of, no broken lamps,seats were not torn up as before. 3D is present in this theater.

Cinema North Corporation opened this theater in July 2000, first converting it into an eight screen multiplex, formerly a Jamesway Department Store. The chain of approximately ten theaters, were run by two partners who inherited the business from their relations. Their theater circuit was headquartered in Vermont, with the Carmel location being the furthest to the South. The cost of converting the theater was approximately 500k. I was the General Manager in charge of daily operations, for a number of years. I was hired for my expertise in the theater industry. My prior experience in management and customer service, included working in New York City’s premiere theaters, the Little Carnegie, the Ziegfeld and more. I have won awards for my work, most notably; In 2010, our theater was the recipient of an award from the nationally recognized organization VESID, after being nominated in both 2009 and 2010, by Careers for People with Disabilities. The award was for managing and keeping our developmentally disabled employees, gainfully employed. The award was for the prior years, while under the direction of the Cinema North Corporation. In 2005, we were recognized in a competition, for DreamWorks. Financial problems plagued Cinema North Corporation circa, June 2010.