Thanks for all the updates! A few weeks ago I spoke with the granddaughter of Harry Miller, the original owner. Had a delightful visit and viewed the oldest photo I’ve seen of the theater building. 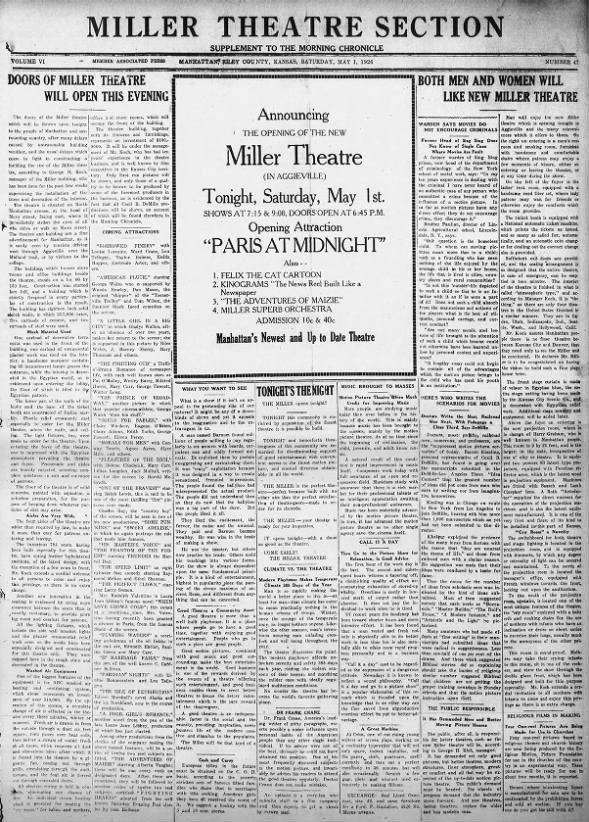 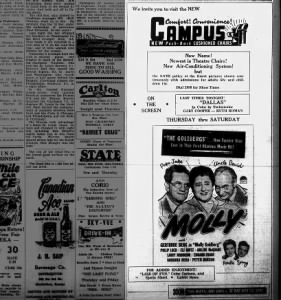 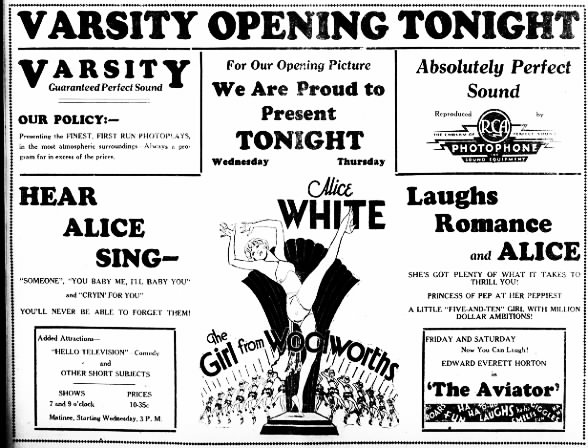 Here’s an update: Varney’s Book Store (which bought the old Campus Theatre building) has gone out of business. It is my understanding that the new owners (Rally) are converting the building to a business that specializes in K-State apparel and associated university items. The marquis is still there and continues to be the last remembrance of the Campus Theatre.

Harry Miller built the Miller Theatre in 1926 as a silent movie house. The architect was Henry Winter, a Kansas State graduate. It was, indeed, made in the Egyptian style, with huge murals of desert scenes on the interior walls. It was sold in 1927 to W.R. & Etta Browning. The Brownings changed the name to The Varsity in 1931. A fly gallery was added to accommodate live productions. In 1935 the theatre was purchased by Sam Sosna and the name changed to The Sosna Theatre. In the mid-1950s, the theatre lobby was expanded to include a complete concessions stand and the name was changed to The Campus Theatre. In 1998, Carmike Theatres put the building up for sale. About 6 months later it was purchased by Varney’s Book Store and converted to retail space. Best wishes, Dan Walter www.aggievillearchives.com www.facebook.com/aggieville.archives

It looks like the opening name of this house was Miller Theatre. Here’s an excerpt from a document about historic resources in Manhattan prepared for the National Register of Historic Places. It’s from a section of the document that concerns a Manhattan architect named Henry B. Winter, who was active in the first half of the 20th century:

“Designed in 1926, the Miller Theater at Moro Street and North Manhattan Avenue had an interior based on an Egyptian motif, reflecting the influence on popular culture of the discovery of King Tut’s tomb in 1922.”

So Harry B. Winter was the architect, the original style was Egyptian, the opening name was Miller Theatre, it became the Varsity Theatre by 1932, the Sosna Theatre sometime between 1935 and 1940, and the Campus Theatre probably no earlier than 1946, when Sam Sosna sold the house to the Griffith circuit.

pedropolis: The book store that occupies this building is apparently thriving, so it’s unlikely that it will become available for use as a theater. I’ve never been in the book store, so I don’t know if they leveled the floor or not, but they probably did, and if they did it’s probably solid concrete. Ripping out a concrete floor to restore a traditional sloped theater floor is very expensive, so turning it back into a theater would probably involve building a new stadium-style seating area, assuming the ceiling is high enough to accommodate one.

Chuck: I’ve found no evidence that Varney’s Book Store ever showed movies in this building. The terra cotta (or faux terra cotta) piece on the parapet reading “20 * Jon A. Levin * 00” refers to the owner of the book store, and 2000 must have been either the year he took over the store, or the year he incorporated the theater space into the book store.

The theater’s original name, Varsity Theatre, still needs to be added as an aka.

Does anyone know if any of these theaters have the possibility of being re-opened? I have a client who is looking for a theater space near the university.

Identical seat counts of a non-round number, coupled with the other information I dug up, seems good enough to me. I think the aka of Varsity Theatre should be restored. As the theater opened in 1926 and is in a college town, it’s likely that Varsity was its opening name. It was a very popular name for movie theaters in the 1920s. It probably saw its fair share of raccoon coats, hip flasks, and co-eds in cloche hats sneaking smokes in the ladies room.

I never saw this CT page before tonight, so I don’t know what information might have been in Lost Memory’s original introduction and later removed, but sarakali might have been mistaken about the Campus/Sosna never having been called the Varsity Theatre. There was an earlier Varsity Theatre in Manhattan, unrelated to the house that opened in the 1960s. The earlier Varsity Theatre was listed in the April 14, 1932, issue of New England Film News as one of the theaters that had recently installed RCA sound equipment.

An obituary of Sam L. Sosna in the February 8, 1960, issue of Boxoffice said that he had operated the Sosna Theatre at Manhattan from 1931 until his retirement in 1946, at which time he sold the house to the Griffith circuit. While this might indicate that the theater had been renamed the Sosna before the 1932 mention of the Varsity was published, it’s possible that Sam Sosna didn’t rename the theater immediately, or perhaps he was just thrifty and ordered the sound equipment using a remaining Varsity Theatre letterhead soon after acquiring the house in 1931.

This is a fairly tenuous surmise, though, so I wouldn’t add Varsity as an aka without confirmation from some other source.

Actually, the Campus Theatre was located at the junction of Manhattan Ave. and Moro St. Varney’s bookstore bought it a few years ago, gutted it, and enlarged their existing store into the theatre building. The Varsity was about two blocks further east on Moro. I worked at both of them.

I was the projectionist at the Campus Theatre from 1968-1978 (less a 2-year stint in the Army). The theatre was originally called the Sausnaw (sp) Theatre and owned by a local family in Manhattan. It was part of the Commonwealth Theatre chain of Kansas City, Mo.