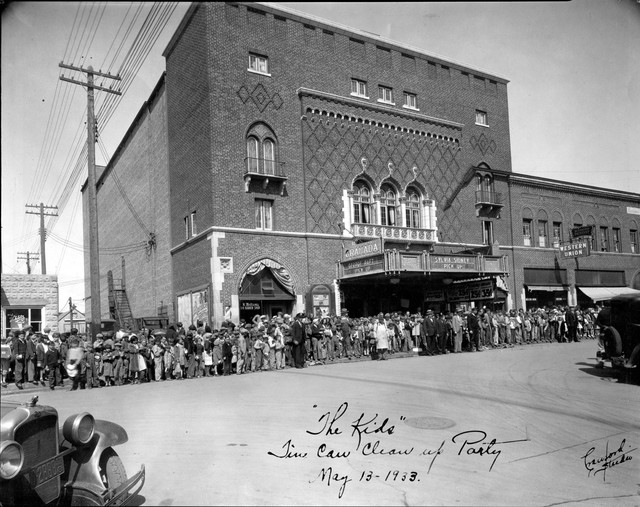 Opened on April 16, 1927 with Laura LaPlante in “The Love Thrill”. It was operated by the Hostettler Amusement Circuit. It was equipped with a Kilgen theatre pipe organ. was closed in 1977. The Atmospheric style auditorium was enhanced by Baroque style castle turrets, while the vestibule had an ‘English Gothic’ style.

Johnny Carson, who worked as an usher at this theatre, filmed a television special at the Granada Theatre in 1982. The theatre was torn down in 1989.

Johnny Carson filmed a segment of his 1982 TV special “Johnny Goes Home” in this theater. Scenes were filmed in the theater as well as the basement, which was used by employees as a changing area. The exterior of the building was also shown.

This show is available as part of the DVD set “The Ultimate Carson Collection.”

Quetion about the Theatre organ that was in the Granada Theatre. Where is it and how can I get to it? Why you ask, Well my grandmother played it when she was a young girl and I was wanting the same opportunity. I hope. You see my grandparents work at the Granada as well as the Drivin Theatres in Norfolk and so the Theatre feelings run fairly deep in the blood of our family. And if anyone has any questions about the Granada or the Drivin Theatres Just ask I will let you know and if I don’t know I will ask my grandmother and Then I will let you know. thanks

I just watched the Johnny Carson special “Johnny Goes Home”. What a shame that this theater was demolished. It was beautiful. It reminded me very much of the Paramount in Anderson,In where I grew up. Thankfully the Paramount was saved before the wrecking ball came.

At the time the theatre was purchased by the last owner, the organ had been long gone. I remember at the time how he had himself commented on the ogan from yester-year. The ceiling was also pierced whith lights above the holes to represent stars in the heaven.

I myself am a professional artist and I had my first studio as a professional in the space that the arcade now occpies. While the theatre was in operation even throughout my childhood, this space was occupied by a barber shop. The origional blueprints for the adjacent building (KoensteinBuilding)are in the posession of the Norfolk Museum. I found them myself in the basement of th building. I do not remember if the folio also included the blueprints for the theatre.

Oe of the few remaining pieces of the facade ceramic work is located under a pine tree at 1729 W. Maple. It is of buff clay, with a white titanium or zinc glaze. I saw this piece myself in 2009. I do not know if it still remains at this address. The property was sold at the time of the owners death.

The theatre was sold in 1980+–. The theatre was restored to its originas condition and used for traveling stage acts similar to those preforming there at the time of its construction. Within two years+– of its renovation, the theatre was razed for a car-park.

Ask any questions. Apart from the owner ofthe theatre (1972-1980+–) I was the only individual who took much interest in the structure.

A photo of the Granada Theatre in Norfolk, NE can be seen here.

The Spanish architecture of the Granada Theatre is why its name was selected over 127 others submitted by Norfolkans. Elbert B. Watson was the architect of the project. The Granada launched April 16, 1927 for the Hostettler Amusement Circuit with a big, six unit show. It began with Virginia Witkowsky at the Kilgen Wonder Organ. The big finale was the night’s feature with Laura LaPlante in “The Love Thrill” supported by a newsreel, Bobby Vernon in the Christie comedy short, “Jailbirders,” and live music and vaudeville.

The theatre converted to sound in the Fall of 1928 to remain viable. Paramount Publix operated the theatre in the 1930s. After several operators, the Granada closed at the end of its lease in 1977.