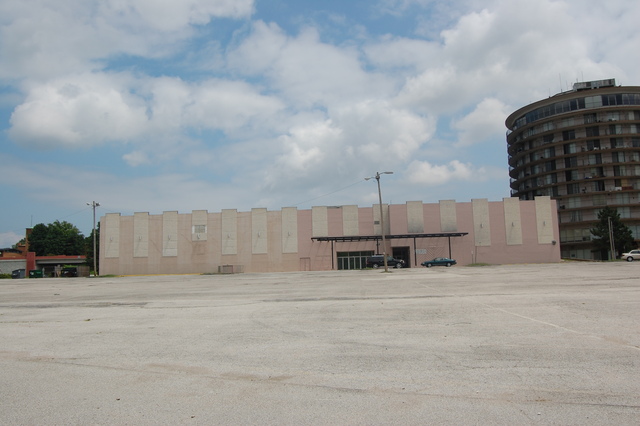 The Lewis & Clark Theatre was opened by the Arthur Theatre chain on June 11, 1965 with seating for 1,042. It was located next to the Lewis & Clark Towers. It was a large single floor single screen theatre with a sloped floor running first run attractions when it first opened. I am not sure of the time line of the theatres but after it closed it became a night club and dance facility.

The building is still standing and unmistakable that it was a theatre. When entering the theatre the lobby ran from front to back of the building with the entrance to the auditorium on the left. The interior including the plush seats were done in various colors of green. The walls were lined with a darker green drapery. In its later years it ran sub run and was a discount theatre before closing.

Drove past the place a zillion times…never went inside.

Theatre reopened in February 1982 as a dollar house under independent management. A short career, however, with theatre closing that September.

Checked the google aerial photos for 9977 Lewis & Clark Blvd, but I get an address for the main intersection (divided highways) of Lewis & Clark and Cambers. – no sign of any old buildings in the area. Is it possible the area was redeveloped recently?

Isn’t this theatre located in Moline Acres (rather than Saint Louis)?

Google Maps will fetch the address for the theater that Chuck gave, but only if you write the street name as Lewis and Clark. Apparently an ampersand confuses their software.

In the street view from Lewis and Clark Boulevard, the theater building is hidden by a long row of shops. You get a pretty good view of the theater across a parking lot from 2568 Chambers Road, if you use the zoom feature. It’s a rather plain and boxy Midcentury Modern structure, but it looks to be in pretty good shape, at least on the outside.

According to Barry Monush’s book “The Sound of Music FAQ,” the Lewis & Clark was one of two cinemas in the area (the other being the Ellisville Theater in Ellisville) that screened “The Sound of Music” starting in November 1966 after its 83-week roadshow engagement at The St. Louis Theatre (what is now Powell Hall) closed less than a month before.

ptouchette81: I would like to offer a clarification on your comment pertaining to Barry Monush’s “Sound of Music” book. Simply, Mr. Monush was not the first to identify the detail you cite. For the record, I’ve prepared three retrospective articles on “The Sound of Music” — one in 2005 for its 40th anniversary, another in 2010 for its 45th anniversary and yet another in 2015 for its 50th anniversary. The 45th piece, by the way, was published here at Cinema Treasures. (A link in the right margin appears on every database entry page of any theater mentioned in the article, but apparently the link in the right margin under the News About This Theater heading isn’t easy to notice.)

Anyway, Mr. Monush used my research (with permission) as the blueprint for his roadshow engagements chapter. I must admit, though, I should add I was quite disappointed when instead of re-printing my work as it originally appeared he instead created a derivative work and worse he misspelled my name and erroneously cited the original publication source.