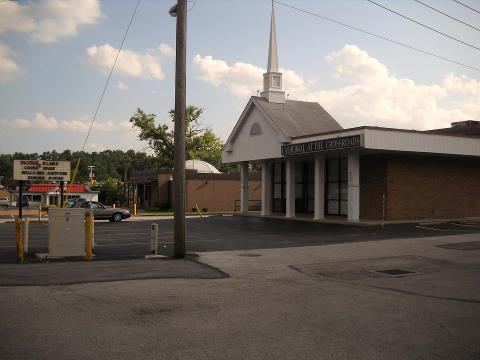 The Jerry Lewis Cinema was one of a trio that operated in the St. Louis market. When it first opened June 2, 1972, it showed mostly family fare. The theatre also had a small organ to the side of the screen that was used infrequently. The theatre was decorated in mostly a burnt orange color with brown accents. The walls were lined with orange draperies. Later, it was booked by the Arthur Theatre chain for a while and was renamed the Central City Cinema.

Later operating as an adult movie theatre it was closed in May 1979. The building is now a church called the Cathedral of the Crossroads. They have added a large steeple to the front of the theatre and white columns also. They have kept the front entrance doors and ticket booth intact and from the sides and back there is no mistake that this was once a theatre.

I’m almost certain Wehrenberg Theaters ran this place for a while in the 70s, as I remember a Central City Cine in their newspaper listings for a brief period of time.

Anyway, here’s a link to the church’s website: http://catcchurch.org/Home_Page.html
If you go to the site, there’s music playing on every page, so be ready to turn your volume down. But if you look at pictures you can tell that their auditorium still looks very much like a movie theater.

Kyle’s recollection is correct. Wehrenberg operated the venue from December 1975 to October 1976. This after Arthur operated from May 1973 to December 1975.

Not helping the confusion was an item in the Box Office magazine issue of 5/14/73 which read:

I’ll make this even more confusing…Central City eventually went to Wehrenberg, and the Bridgeton Cinema, if memory servers, went to Mid-America, who changed its name to the Bridgewood…OK, I need to get out of the house now :)

It also means that Jerry Lewis Cinemas bailed on St. Louis after barely a year in business.

And, apparently, in many other markets. A comment for the JL in Canton, CT says he was sued in 1973 by franchise holders…who won the case.

An article in the Post-Dispatch in February 1974 said 10 franchises had been sold in Eastern Missouri and Southern Illinois…and that the Jerry Lewis moniker was no longer being used. The article further stated 2 were closed—Bridgeton and Lake of the Ozarks; 5 were operating under different names; and 3 were never built…in Highland, Ill., Mt. Vernon, Ill. and South St. Louis County.

And, one wonders if the eventual Mid-America and Wehrenberg connection in St. Louis was possibly just as bookers.

And, a correction to my comment of 10:26 this morning: the last name of the Central City manager was Gowan, not Cowan.

Passed this place a million times. Never saw a movie inside.

I have something to add to JAlex’s post: The Post-Dispatch once reported that the Jerry Lewis chain was planning to build a cinema in the St. Louis suburb of Overland; it was never constructed. The three Jerries that came to fruition in this market were the one on this page, the one that became the Bridgeton/Bridgewood, and one on Bellefontaine Road that survived longer than the others as a link in a small chain (People’s, maybe? My research notes are in storage.)