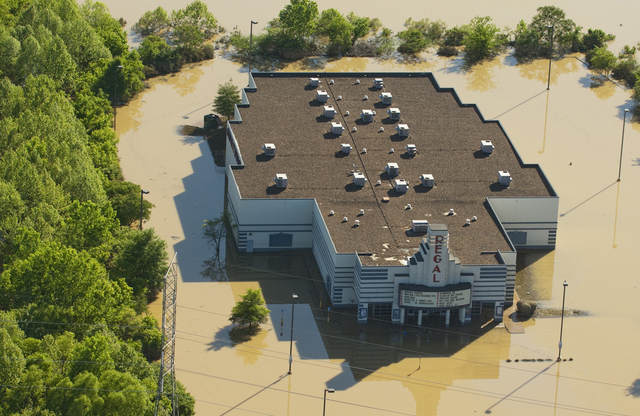 A very attractive and architecturally distinctive theatre with a clean, sort of streamline modernaire design. It was opened March 31, 1995. It was closed to flooding in May 2010, and never reopened.

In 2015 it was converted into a shooting range name Royal Range.

While working for Regal Cinemas, I installed the projectors in this theater while it was being built. All twelve houses could be interlocked, i.e a single print could be run through all houses at the same time.

This theater is currently being turned into a shooting range, aptly called “Regal Range.”

It is now the “Royal Range” where the E and G have been replaced with a similar font O and Y.

Well David, that is an interesting comment. Regarding that endless loop platter, this link is for a theater in Atlanta where I occasionally worked:

My comment is first in line and describes my experiences of running that thing which mirror yours. Further down there is a link to a theater in Delaware that actually used that abortion to run regular movies.

As for Regal paying minimum wage and requiring the operators to wear uniforms, that was standard practice for them in Atlanta. In addition, they were required to work the floor when not actually threading up, even if only for a few minutes. The point, of course, was to keep them from getting the idea that they were anything special and thus entitled to a living wage. AMC took it a step further by trying to make the booth position just like any other. They would try to make sure the manager scheduled different people to work the booth and that the “projectionists” worked shifts down on the floor. I received many prints directly from AMC theaters that were both damaged and improperly broken down.

I was amused the other day when AMC was forced to downgrade their guidance to investors because their big summer quarter is going to be a financial disaster. I do not understand this. For years I was told in negotiating sessions that having to pay a professional projectionist prevented the theater from making a profit. With the advent of digital, operatorless projection they should be making millions.

@StanMalone — Classic Cinemas in Illinois had a number of theatres that regularly used the Endless Loop Platters for their daily operation.

Below is a link to a picture on Cinematour of one such operation. I remember seeing this in a few of their theatres and thought it was pretty ballsy, since one thing went wrong with that platter and I have to imagine you were down for the rest of the day trying to get the film back in order.

@IMAXGUY: My name is David Leadbetter. Roger Frazie (Head of Projection, Regal Cinemas), Pat Cauldwell (Area technician, Regal Cinemas), and myself built this projection booth in ‘95. I was Head Projectionist of this theater for the next 3 years, during which time I was often asked to go to the other Regal’s in Nashville and train operators. I was also brought along to help install other Regal’s (Bossier,LA.– Jackson,TN) and train their operators. I am curious as to who you are and where you get the idea that all 12 screens could be interlocked, because we never wired the two sides together while I was there. I had asked Roger if we could do it, but Roger said it would be overkill. So we only ever had 6 on each side wired together for interlock. The booth had a rear projection screen overlooking the lobby. It was an old simplex with a continuous loop platter. The image was thrown against a large mirror to reverse the image back to normal. On it we ran trailers, and I was the only one they ever had there who figured out how to run it and keep it running (years after I left, Manager Vernon Womack told me it never ran again). The booth had Strong Platters, Simplex 35mm’s with Xetron lamp-houses and automation. We had Dolby processors in all the auditoriums, though only the 2 large houses had true left-center-right speakers behind the screens. All the other houses had one center speaker and we wired left and right front channels into the left and right surround speakers. MAJOR RIP OFF! In fact, every thing about Regal Cinemas was a major rip off. They didn’t believe in paying anyone their worth. It was corporate policy to pay Projectionist minimum wage AND they had to wear this ridiculous costume/uniform all day upstairs, where NO ONE ever went or saw them. ALL of the operators I was given to train were teenage kids, so we had scratched and torn up prints and equipment that was constantly abused and in need of repair. I tried to tell the DM’s that it is possible to run film without scratching it, they didn’t care. Spent most of my time running around Nashville putting out fires any professional projectionist would never start. I ended up hating Regal. I left to go back to Memphis and Malco Theaters which paid a STARTING wage for projectionist that was competitive with any Union. Good people, really care about film. Regal Cinemas only ever cared if the concession stand looked good. Idiots.

Zeb?? Hey David, Pat here! I come to Memphis occasionally to service the Digital IMAXs there! Live North of Nashville, still with IMAX. Won 2010 best Imax booth contest. https://www.giantscreencinema.com/Awards/Past-Award-Winners/2010-Awards. Pix of me there. Call imax 9054036500 and have them email me your number. Good to see you!

@zebtheamerican I reset my phone…your number wasn’t backed up! Call me! Before July 10!