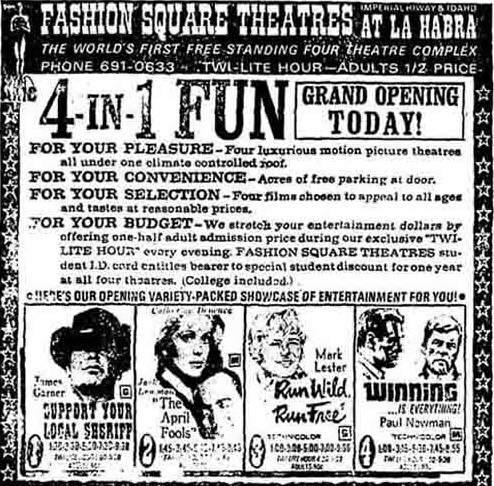 According to AMC Theatres, this was the world’s first freestanding four-theatre complex. The $600,000 theatre opened on August 27, 1969.

As I remember, the auditoriums of the Fashion Square 4, which seated 375, 375, 200 & 200, were irregularly shaped and gave me a cramped and awkward feeling that I wasn’t seeing the entire film. I never counted it as one of my favorite cinemas but I went there from time to time for the novelty. The good news for me, a college student at the time, was that they had a twi-lite hour where I could get in for .90 cents which was half of the regular adult admission. This was a bargain for one of its opening attractions, “Support Your Local Sheriff”, which was not first run as it had first played the county in early April.

This was AMC’s first theatre on the West Coast and their sixth multi-screen operation, having previously gone as far west from Kansas City as Dallas. It was listed in the L.A. Times under the independent theatres banner. Their future plans were to embark on $50 million expansion program, which would add 80 new multiplexes to the company once known as Durwood Theatres.

At the time there were about 35 other theatres in the Orange County, represented by Loews, United Artists, Pacific Theatres and National General, which included four old Fox West Coast houses. In addition to some independent venues there were a two adult theatres, one of which was a Pussycat. Edwards had just four locations at the time but within ten years they would be the dominant force in the county with 13 locations.

Edwards president, James Edwards II and AMC’s president, Stanley Durwood while most of the time not direct competitors had a friendly rivalry, with each disputing which one built the first multiplex. This is discussed in a 1997 Forbes magazine article, “My Megaplex Is Bigger Than Your Megaplex”. In the Forbes piece, 90 year-old Edwards was very forthright and perhaps somewhat jesting in his comment about 76 year-old Durwood. This competition culminated when Edwards Theatres lost out to AMC in building at the Ontario Mills so they bought land 900 feet away and built their own theatre, resulting in 52 screens and an Imax within a block.

Even as the Fashion Square opened AMC had plans to build a 12-screen elsewhere, consisting of three quads on different levels. Its then general manager, Robert Goodfriend, told Newsweek magazine “I’m not too excited about it. I would rather stick with fours and sixes.”

On their final day of operation, January 5, 1992, a simple “Thank you for your patronage” appeared in their ad. This left three AMCs in the county, the Fullerton 10, the Mainplace 6 and the Orange Mall 6. It wasn’t until 1998 that they built the AMC 30 at the Block in Orange.

The Fashion Square 4 was later demolished and in 2000, Regal Theatre 16 opened nearby in the renovated shopping center.

The original interior color scheme was red and gold.

I have so many memories of the Fashion Square 4. I saw The 1976 King kong, Superman the movie, and so many others. One od thing I do remember, When I first started going they used a detached ticket booth to the left of the building (When facing the main door) then shortly after stopped and switched to a window at the main door. I never could find out why.

I grew up in the Euclid/Imperial Hwy area right up the street. The La Habra Fashion Square 4 was an institution in our family. I recall seeing many movies there. Among them I recall was “Young Frankenstein”,“Gorky Park”, “Blue Lagoon”, several Disney films, if I really think about it I’m sure I could come up with a long list. Sometimes after a movie we would go to the little “Fiddlers Three” restaurant right next door. It was a cute little family owned place with some reasonably good food.

I no longer live in California but one day on a business trip I was in the area and drove past and was shocked to see it was all gone. In fact the entire Fashion Square Mall was gone! It was never a great theater, average at best, but it made me sad to think of all the good times I had there. What was really tragic is when they tore down the La Habra Drive-In across the street. The neon out front was beautiful and it was all destroyed in vain. They built a Target store there which failed in that location and has been closed and boarded up for years now. So sad.

I worked at AMC Fashion Square in the late 70’s. I inherited an Usher position from my brother who was going away to college. The people who worked there were great back then. Awesome memories. I also was General Manager of the theatre in 1985. The business volume had dropped but still a great character theatre!

Oh my god! this theatre was my childhood. Remember seening so many movies here as a kid. Even attempted to sneak into and R rated movie only to get kicked out by the usher. I also remember the restrooms being downstairs under the auditoriums.

The drive-in theater became a Super K-Mart which was closed in 2008/9? Target demolished the k-mart and a new target was built in its place. There was a Circuit City there that went out of business almost immediately as they went bankrupt. I grew up in the Fullerton area and used to ride my bike to this theater and play games at the Milky Way arcade. Was one of the best arcades around but was in decline with the rest of the mall at the time.

According to the LA Times display ads, Krikorian Theatres reopened this location on 1/31/1992 appeared to operate this until 9/4/1997. This and the La Mirada 7 were not sold to Regal when Regal bought the other Krikorian Theatres.