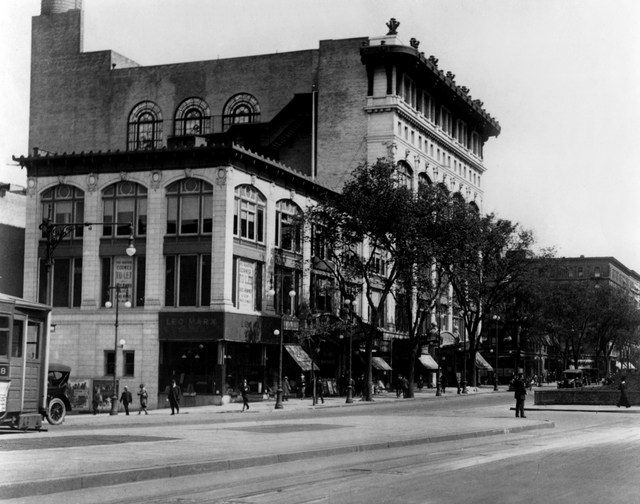 The Japanese Roof Garden Theatre was located on Broadway at W. 96th Street on the roof of the 1,718-seat Riviera Theatre (which has its own page on Cinema Treasures). It opened in 1913 with 1,024 seats and was operated by William Fox. It was still operating in 1930 and was a summer only operation.

Thanks for the tip, ‘btk630’; I wish the Style search selection here were that specific. It is wonderful the restoration that they are doing at the REDFORD, certainly a model for so many other organ groups in other cities! Pity the RIVIERA/JAPANESE GARDENS is no longer with us to experience this latter day trend to restoration and adaptive reuse, but then that could be said for any number of theatres.

A recent article in a Los Angeles site describes the Japanese-themed theatre, the LINDA LEA, in some detail and makes good reading here on its page at CT: /theaters/3493/

The loss of the Riverside and Riviera Theaters was incredibly tragic. Not just for me, but for the neighborhood. The Riviera was a “Subway Circut” house as well as a showcase for touring legit productions. I believe that Sarah Bernhardt performed on the Riviera’s stage. The Japanese Gardens was in the 10 story building above the Riviera. The Riverside was a larger house that wasd on the the Keith Orpheum Circuit. The location of the theaters was signifigant. Not only were they located next to a subway stop but they were 2 blocks from a siding of the NY Central Railroad’s Hudson Line. A packaged show would travel by train so their location made loading in and unloading a show easy (to this day flats are still built to fit into a boxcar).
I had seen 100’s of movies in these theaters. The balconies were closed off in both theaters. They were dark and mysterious but incredibly beautiful. They had a smell of cigarettes and popcorn in a good way. The boxes had been removed to accomadate wider screens but other than that they were intact.

When urban vandal Chris Boomis announced that he was going to tear them down and put up an apartment tower I was devastated. He only manages to knock a hole in the side of the Riverside before running out of money. It was almost shocking to see the red velvet curtain hanging in shreds behind the now battered proscenium arch. The enormous balcony was collapsing. Then the whole thing collapsed out onto 96th street (several parked cars were crushed) and inward. The fire and police departments searched and dug for days, looking for the junkies that supposedly lived in the shell of the Riverside. I remeber seeing a hysterical woman on the news screaming that her daughter with a drug problem was in there. No bodies were ever found.
The Riviera building remained standing for a few more years.
I know that a movie staring Don Johnson was shot in the Japanese Gardens but I also know that the Gardens had been used as a rehearsal hall. I knew someone who had been involved with the origina Broadway production of “Eubie” and she told me that they had used the space for a while.
Finally the Riviera building was torn down. According to neighborhood fokelore and urban legend 2 bodies were found in a subterranian passageway that connected the Riverside and Riviera.

I also own a copy of “Marquee” from 1994, which features “RKO theatres of Metropolitan New York.” It’s a great magazine offering theatre photos most folks never got to see.

My grandmother told me that there was a theater upstairs of the Riviera. This was in the early 70’s. I wish I had gone on my own to investigate. I have seen the floor plans of these theaters and there was, as far as I can tell, no way to get from the office building part of the Riviera Building to the theater. I guess that Thomas Lamb wanted to thwart those trying to sneak in for free. I have pictures in my store of these theaters. In one photo you can see the stained glass windows that had been boarded up by the late 30’s. I have 2 pictures, tax ID photos taken in 1938 or 1939 of these theaters and by then the windows where boarded up but the Japanese Gardens was still open.

According to Bette Davis, she performed at, as she put it, “the ‘Shubert’s Riviera’, well at least it was a Shubert” in the bio “Girl Who Walked Home Alone”.

I just discovered this site and was thrilled to see the Japanese Garden and comments. I grew up on West End Ave. and 99 St. and my sister and I had a “shortcut” way to get to school at 93rd and Amsterdam – through a passageway in an apartmentat 98th St., then through an alleyway behind the Riviera and Riverside theaters, where we always stopped to lokat the elevator that went up to the Japanese Garden, then on to Pomander Walk between 94th and 95th – an English-type alley with tiny houses. But the Japanese Garden was always the exotic lure. I’m sure I went to films there because I remember what fun it was to take an elevator to the theater. This was in the early 1930s (I’m 86 now). The photo shown on the site must have been earlier, because it does not show the Riverside Theater at the corner of 96th and Broadway. Eileen Lavine, on Sept. 1 at 2:45 p.m.

Thanks Eileen, I was wondering where the Riverside and Riviera were in that photo.

The film with Don Johnson that was shot in the Japanese Garden Theatre is The Magic Garden of Stanley Sweetheart of 1970. https://www.youtube.com/watch?v=cGL6q_SHjYA One can see the ceiling at 1:18:22.