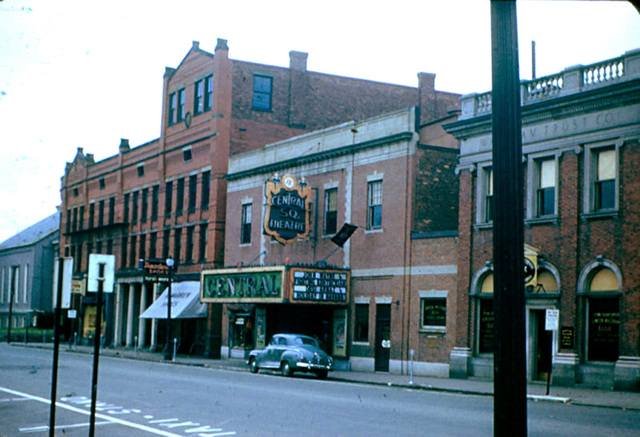 This was a smaller theatre in Waltham near the Waltham Commons. It was opened by 1922 with 800 seats. It had a great neon marquee and often showed foreign films, that were never booked at the larger Embassy Theatre. Would love to find some photos of this cozy theatre.

Was this theatre run by American Theatre Corporation?

Does anyone have any pictures of the marquee of this theatre?

The Central Square was part of M&P Theatres as of 1942; it may have gone over to ATC after WWII (the Embassy did). The Central Square is listed in the 1927 Film Daily yearbook as having 800 seats and being open 6 days a week. It was included in the MGM Theatre Photograph and Report project. There is a photo dated May 1941. At that time, the theatre had a rectangular marquee with “Central” in big bulb-studded letters on the front, and 3 lines of white letters on a dark background on each side. The Report states that the theatre is at 31 Moody St., that it is a MGM customer and has been for over 10 years; that it is over 15 years old; that it is in Good condition; with 607 seats on the main floor and 368 balcony seats; total: 975 seats. The commpeting theatres are listed as the Embassy and the Waltham Th. The 1940 population of Waltham was 40,000.

Unbelievable! Where are you getting the info? Thanks again!

To Forrest136- for comments about the MGM Theatre Photograph and Report project, see the Page for the Warner Theatre in Worcester.

The ‘Central" as everybody called it was run by ATC as Ron stated, Harold Gordon was the manager up to it’s closing.Not as classy as the Embassy they ran alot of horror flicks, they wired the seats for the 'Tingler’.the cool thing about ATC theatre marquees was the ATC logo of the eagle, also in neon!

I used to go to the central sq as a kid.I lived in Waltham at the time.

My family, friends and I used to see movies at both the Embassy and the Central. The Embassy was the “A” house where the big budget releases from MGM, Disney, Paramount and the other major studios played. I think the last thing I ever say there was either BUTCH CASSIDY, THE WILD BUNCH, or possibly DIAMONDS ARE FOREVER in 1971.

My parents would often drop us off at the Embassy for their classier Saturday matinee – good cartoons and a big budget adventure, SF, or comedy film. We’d wait til the care drove away and then high-tail it to the Central to see The Three Stooges, and something like THE PREMATURE BURIAL. Ah, the good old days…!!