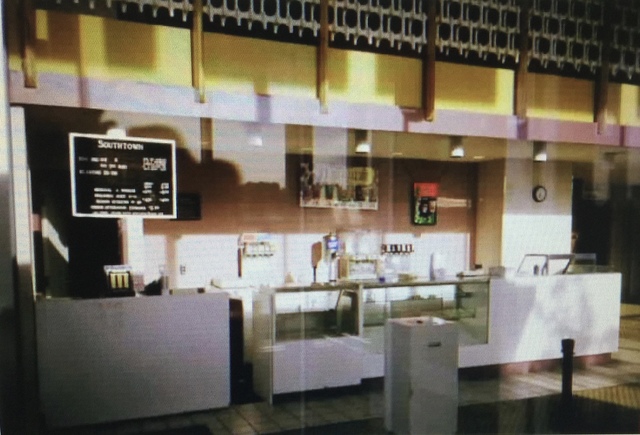 The Cinema Westlane opened in 1967. From what I remember, it was a big utilitarian box that I only went to a couple of times. It along with the associated Southtown 4 across the street were landlocked with marginal parking. The Westlane has been torn down and replaced with three chain eateries.

The CINEMA WESTLANE opened as a single screen circa 1970, on what was, and is, a principal highway on the western edge of Milwaukee county, and it is also a designed US highway and now is six lanes divided. Taking advantage of the adjacent shopping district, a subsidiary of the General Drive-In Corp. of Boston built a duplicate of a template cinema design by architect Maurice D. Sornick of Massepequa Park, NY, under local architect' supervision. This design is pictured in “Marquee” magazine of Second Quarter, 2004, on page 18, of the Theatre Historical Soc. of America (www.historictheatres.org). A two story high, glass walled lobby contained the most distinctive feature of the modernistic design: a lobby mezzanine screened off from the lobby by means of a new, white plastic grillework called “Sculpta-Grille.” The forty foot wide by ten foot high expanse lent a distinctive elegance to the channeled steel ceiling, huge white orb lights and synthetic wood veneers, but no such distinction was in the shelf-balcony auditorium. This was one of at least four such designs; others were in Texas and Missouri, all razed.

Many years later, the Marcus chain acquired it and renamed it the SOUTHTOWN 5&6 to link it to the SOUTHTOWN (then 1 through 4) directly across the street. No traces of any of these theatres remain, though a local member of THSA, Joe Zollner, did take demolition photos of the SOUTHTOWN 5&6 and when I find the link to them, I will post it here.

To the right (north) of the word on the roofline: CINEMA was originally the word in red neon script: “Westlane.” Of course, this was removed when Marcus bought the place to join its cinemas across the street, the SOUTHTOWN, which was by a different architect and therefore of an entirely different design.

Since the CINEMA WESTLANE was a template design, all the other such designs used the same rooftop sign “CINEMA” in the same large block white fluorescent-backed black letter blocks, with provision for a different neon name sign to the right of it. The others known were: the CINEMA BIG TOWN, Mesquite Texas; the CINEMA NORTHLAND, Jennings MO; and the CINEMA SOUTH COUNTY, St. Louis MO., all razed.

I’m confused. The Cinema pictured, called Southtown, opened in 1967. Was it named Westlane until it changed ownership in 1970?

It opened with the name CINEMA WESTLANE, and when Marcus bought it from General Cinema in 1984, it was renamed the SOUTHTOWN 5&6 to complement the SOUTHTOWN 1-4 owned by Marcus across the street. For a while, therefore, there were 2 SOUTHTOWNS, one across the street from each other, so if someone just used that name in speaking to someone else, it would lead to confusion if the numerals or the side of the street were not mentioned. It was obviously a case where Marcus cinemas had more vanity than common sense; they were eager to expell any memory of General Cinemas in the area, since they have always wanted to become a monopoly —and very nearly did. The SOUTHTOWN (WESTLANE) mentioned on this page was on the west side of the street (which is a state highway, not a Federal highway as I mentioned above).

This was a god-awful theatre from the get go! When GCC twinned it what you wound up with was two tiny theatres with postage stamp size screens stuck half way up the front walls! They did the same thing with the Brookfield Cinema, and in that one they didn’t bother to straighten out the rows of seats, Brookfield was a good size house with a big screen so the rows curved in half-moons from left to right, when they put the wall down the middle they left the curved rows as is, which meant that if you sat either in the far left of #1 or the far right of #2 you were not facing the screen head on, you had to turn your head slightly! Westlane wasn’t that big and as I recall the seat rows were straight across. But this one was so bad I would have helped drive the bulldozer that flattened it!

Open as a single screen by GENERAL CINEMA, later split by same, still later purchase from theater chain across street who had four screen they renamed this there SOUTHTOWN 5 & 6