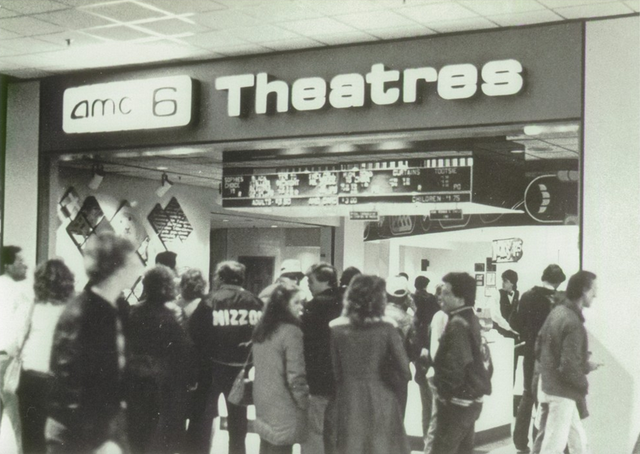 The Metro North Mall 6 was located at NW Barry Road and N. Broadway at the Mall. This six plex was just three blocks from the Dickinson 6 and a short distance from the AMC Metro North Plaza.

When the Metro North Mall first opened on October 22, 1976 it was playing first run attractions but has been closed fo some time now. It was demolished with the mall in July 2017.

The SDDS is there because AMC was a big backer of the format.

Didn’t this theatre also have THX?

First of all, this is in reference to the theater INSIDE THE MALL, NOT the stand alone theater outside of the mall.

The first commentor was correct. I researched the KC Star and saw that there was a murder. The murderer was 15 year old Derek Clouse who, under orders from his dad, shot his mom during a showing of “Robin Hood: Men In Tights.”

From KC Star on August 11, 1993:
Police took an unidentified 15-year-old boy into custody Tuesday evening after he allegedly shot his mother to death at a Kansas City, North, movie theater.

Witnesses at the Metro North Mall Theater said the teen-ager shot his mother five or six times with a revolver only moments before the 5:20 p.m. showing of “Robin Hood: Men in Tights. ” The 43-year-old Kansas City, North, woman – who suffered wounds to the upper body – was pronounced dead at the scene. Her name had not been released several hours after the shooting, pending notification of relatives.

Police took the youth to the Clay County Juvenile Justice Center for investigation of murder.

Capt. Vince McInerney, a Kansas City Police Department spokesman, said the youth could not be interviewed until juvenile court authorities were present.

According to some of the 25 to 30 audience members, three to six shots were fired just as the coming attractions ended.

“I hear this popping noise, and three or four shots went off,” said Rita Moburg of Kansas City, North. She was sitting with her two children in the row of seats in front of the victim.

“I turned around, and I could see sparks coming out,” she said. “Then he took off running. ” Moburg said she covered her children’s faces as the victim, bloody and apparently wounded in the head, slumped behind her.

While an off-duty Kansas City firefighter rushed to the victim, another moviegoer – Blake Sterzinger, 24, a graduate student from Leavenworth – chased and grabbed the teen-ager.

Sterzinger, who was sitting only three feet away, said he saw the “whole thing in front of me, in silhouette; I saw the muzzle flash. ” He said he saw the youth, who was wearing a baseball cap, drop the gun and run toward an exit.

He said he ran after the youth. “It just seemed like the thing to do, I didn’t think about it much, I just acted. ” Sterzinger said he caught the youth, who did not resist, at the doors leading into the theater. He said he restrained the youth and escorted him into the theater lobby.

“He (the youth) shouted to call 911. Those were his first words,” Sterzinger said.

Before authorities arrived, Sterzinger said, he talked to the youth who allegedly said: “I don’t know why I did it. ” Sterzinger said the youth told him that he had stolen the gun from his father and didn’t know it was loaded.

“He was so shocked; he was white as a sheet,” Sterzinger said.

Aaron Udell, a Lenexa teen-ager, had turned around in his seat just before the shooting began.

“I watched him pull out the gun,” said Aaron, 13. “I don’t know why I turned around. ” Aaron said he also saw flashes.

John Donnelly, an off-duty Kansas City firefighter who was sitting near the victim, said he heard “five or six pops. ” “I heard the pops. I thought that at first it was fireworks. ” His wife, Sandra, said she heard someone laughing just before the shots rang out that sounded “inappropriate. ” Moviegoers reacted immediately to the gunshots but didn’t panic.

Some stood and shouted for ushers to stop the film and raise the lights. Others ducked under seats, afraid the gunman would fire randomly.

According to police, the maternal grandparents of the youth and the victim’s husband arrived at the scene shortly after the shooting.

For the next hour, shopping center patrons and moviegoers gathered outside the theaters, watching the manager’s office door, where police held the suspect.

“I can’t believe it was just a young kid,” Moburg said, shaking slightly. “Can you imagine? ”

Here’s a blurb from another article from the KC Star from 1994:
Lawrence Clouse was sentenced to life in prison without parole in December after he coerced his 15-year-old son, Derek Clouse , into killing the boy’s mother. Lawrence and Paula Clouse were in the midst of a bitter divorce when the killing occurred in a Kansas City, North, movie theater in 1993.

Does anyone know exactly WHEN the indoor theater closed down and the outdoor one opened up????? Is this when the mall really started going downhill or when Montgomery Wards closed?

Earlier this year, Derek Clouse pleaded guilty to second-degree murder and was sentenced to life. He could be eligible for parole in about 15 years.

Edit: My above comment about Derek pleading guilty was pasted in the wrong area. That should be above the 2nd to last paragraph

I was actually in the theatre next to the shooting when it happend. I was watching a movie with my Mom. When we came out they were removing people from the theatre into a closed store across the walkway. They interviewed all of the people in the Robin Hood movie before releasing them.

I truly believe the fall of the Metro North Mall had a lot to do with Independence Center. I know this may sound crazy but everyone I knew from south would always talk about this. Everyone from south would come to Metro North Mall, when Independence Center was renovated and opened up, they started adding all of the “hip” stores. Once this happend Metro North slowly lost some of the smaller stores, once Zona Rosa oppened the larger stores started moving.

I don’t know if this is true or not but an employee at one of the stores in Metro told me the owners of Zona Rosa were the same (probably through loop after loop) and they let certain people out of their Metro leases to move to Zona Rosa.

How odd. What was the movie you were seeing when it happened? I’m assuming you never went back to this theater?

What year did it close exactly?

That is so creepy because I used to go to this one all the time and have no recollection of the shooting. I am trying to remember when it closed; I remember that I drove to the mall and it was still there and that was in 1996. I know the reason for the closing was because of AMC Barrywoods opened up and everyone started going there instead. Just like now the mall is a ghost town because of Zona Rosa. I miss that mall so much and I hate Zona Rosa. Who wants to go shopping outside unless it’s 70 degrees out? Ridiculous! Anyway, I am still floored about the shooting. If anyone has any more information, please share!

The last movie I saw here was Set It Off and that was in November of 1996. I believe it closed the following year, but not sure.

The earliest memory I have of this theater was looking up at a poster for The Road Warrior (I remember a Krull/1983 moment, too).

If I remember correctly- I believe there was a single hallway (for all the auditorium entrances) that lead all the way to an exit door.

Dickenson and then AMC opened theaters nearby which probably took some business away (along with Barrywoods and Zona Rosa).

I don’t remember the incident mentioned previously. I do remember parts of the mall closing off through the years. They use to have those 4 balloons in the center court of the mall that would go up and down.

There was Original Pizza and an arcade next to the theater. I think the arcade use to be a fancy restaurant (as fancy as a restaurant in a mall could be I guess).

This theater may now be listed as demolished as of March 2017. The Metro North Mall has been torn down to make way for new development.

Article and pictures in the Kansas City Star. Link is www.kansascity.com/news/local/article130664359.html