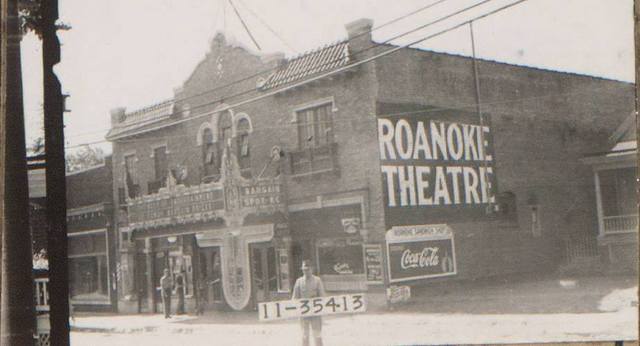 The Roanoke Theatre was opened on January 26, 1913 with Clara Kimball Young in “The Little Minister”. By February 1918 it had been rebuilt and renamed Spillane Theatre. By 1924 it had been renamed Roanoke Theatre. It was another small neighborhood theatre located on Summit Street at W. 39th Street. It was just a short distance from the Vogue Theatre on Broadway. The Roanoke Theatre was still open in 1943, but on July 25, 1946 it was operating as the Teatro Tampico screening Mexican movies. It closed in 1968 and has since been demolished.

The Roanoke Theatre at 39th and Summit Streets was mentioned in the February 16, 1924, issue of The Reel Journal. The house had just been purchased by L. J. Lenhart, formerly of the Gladstone Theatre. Mr.Lenhart planned to expand the Roanoke by about 200 seats, remodel the front, and redecorate throughout.

Did the Roanoke Theater become the Glen Theater or was that another one?

The Westport Theatre became the Glen, according to our Glen page.

The autumn, 2009, issue of the Jackson County Historical Society’s quarterly had an article about Kansas City’s neighborhood theaters, and had this to say about the Roanoke:

This item from the November 3, 1917, issue of The Moving Picture World indicates that the house had not yet been built then:

November, 1918, is the earliest mention I’ve found in the trades of the Spillane Theatre being in operation.

I believe the address for the Roanoke Theatre would have been 811 or 813 West 39th Street. It is now a parking lot. In the picture, there is a building on the left and a house on the right that are still there. Here is a little better picture …. http://kcur.org/post/walk-down-midtowns-memory-lane-these-historic-kansas-city-photos

Midtown_kc is correct. The description of this folder of 1940 tax assessment photos (including the one depicting the theater above) says that the Roanoke Theatre was at 813 East 39th Street (it should actually be West 39th, though.)

The Tampico Theatre listing should be merged with this page.

This reopened as the Tampico theatre on July 25th, 1946. Grand opening ad in the photo section.

The Roanoke Theater opened January 26, 1913 with “The Little Minister.” After a refresh, it relaunched as the Spillane Theater with Douglas Fairbanks in “Flirting with Fate” and Charlie Chaplin’ in “The Champion” on September 7, 1918. On September 4, 1921, it reverted to the Roanoke moniker. The theater was wired die sound to stay relevant. As Teatro de Tampico, the venue closed with Fernando Fernandez in “Frontera Norte” on May 12, 1955. It then was offered for sale and became a financial agency.