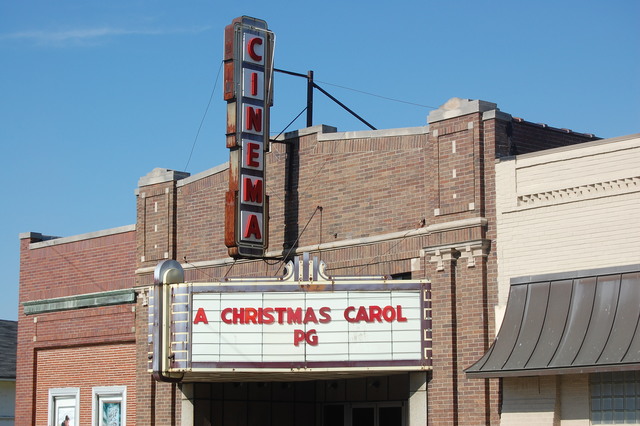 Located on 1st Street at College Avenue in downtown Kennett. Opened as the Alamo Theatre January 29, 1916 with “The Forbidden Adventure”. In October 1916, under new ownership, it was renamed Palace Theatre. In 1927, it was enlarged to seat 800, all on a single floor. It reopened December 22, 1927 with Norma Talmadge in “Camille”. It was later renamed Kennett Theatre, and was remodeled and updated in 1975 when Kerasotes Theatres took over operations. It features Dolby sound, assistive listening devices and is handicap enables.

The single screen theatre now had seating for 576. It is a single story building with a V shaped marquee and a vertical spelling out Cinema. Closed in November 2010 with “Harry Potter, Deadly Hollows Part I”.

It was reopened as the Palace Theater on May 30, 2014 screening “Maleficent”. The seating capacity has now been reduced to 308.

Another former Kerasotes small town theater being closed by AMC, as of November 28, 2010: http://www.dddnews.com/story/1682819.html

A local group is exploring the options for reopening this theater as a not-for-profit, mixed-use facility: http://www.dddnews.com/story/1709189.html. According to the article, the theater was once known as the Palace, which should be among the AKAs for this theater.

Here is a 1928 photo of this house when it was called the Palace, and here’s another view from the same year (click the images to embiggen, then see the “All Image Sizes” link to the right of the next page to fetch even bigger versions.)

In this photo of the Palace, there’s an ad for the 1929 movie “Hot Stuff” with Alice White. This film was a musical, so the Palace had been wired for sound by then.

Oddly, there is no theater name visible on the building in any of these photos. The name and location are derived from text written on the sheets to which the photos are mounted.

We are working on reopening this theater as the Kennett Palace Theater.

The theater is open & running good.

Thanks to the hard work of a few local residents, The Palace Theater reopened in 2014 and is showing first run movies. Check out the latest info on their Facebook page: https://www.facebook.com/KennettPalaceTheater/ or call 573-919-0190