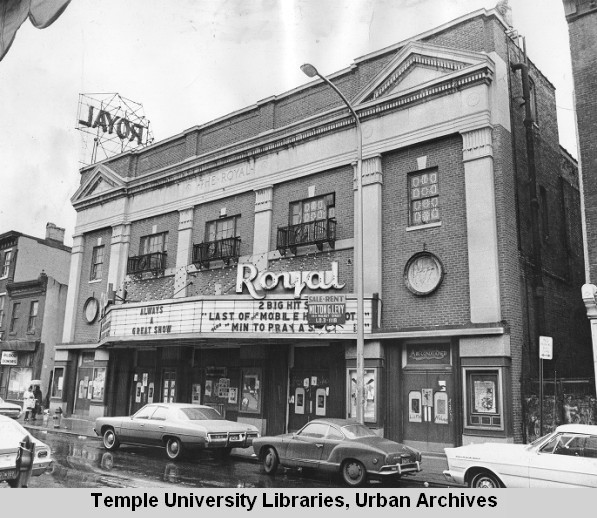 The Royal Theatre opened in 1920 seating 1,200. It was located on South Street between 15th and 16th Streets. The architect for the theatre was Frank E. Hahn whose Neo-Georgian style exterior contrasted with the 1925 Art Deco interior designed by William H. Lee. When it opened it was touted as “America’s Finest Colored Photoplay House”. The staff of the Royal Theatre went on to become the nucleus of the Negro Motion Picture Operators Union. By the early-1940’s it was operated by the Wax Circuit. The theatre closed in 1970.

The Royal Theatre was added in 1978 to the Philadelphia Register of Historic Places and in 1980 to the National Register of Historic Places. To save the Royal Theatre from demolition, the Preservation Alliance for Greater Philadelphia purchased the theatre, but sold it in 2000 to a company headed by songwriter and record producer Kenny Gamble. The theatre’s interior continued to deteriorate. In July 2015, the Philadelphia Historical Commission approved plans to keep only the Royal Theatre’s façade and the very front portion, which may be used for retail, and construct behind it a residential building. Demolition of the auditorium began in early-2017. The South Street façade will be restored to look similar to its original design.

Contributed by Chuck, Howard B. Haas
Get Movie Tickets & Showtimes

The Royal was one of a list of segregated Philadelphia theaters in the 1947 IMPA, along with the Booker, Dixie, Colonial, Douglas, Globe, Joy, New Garden, New Jewel, Pearl, Rex, Ruby, Standard, Strand and Upsal.

This article includes a picture of the theater and a mention that the current plan for the theater is apparently conversion to residential use, although it doesn’t go into detail about what form that residential space might take (the theater is not the sole focus of the piece).

Another news story about how there’s nothing new with the Royal and the neighbors are starting to get ticked off.

Below is from today (July 9, 2012) Philadelphia Inquirer article on South Street:

The other major sore spot is the abandoned Royal Theater owned by Kenny Gamble’s Universal Companies.

“In another couple of years, the building will fall over,” said Feibush of OCF Realty. “It’s in terrible shape. It can be fixed. A dozen developers would love to turn it into something beautiful.” So far, Gamble’s group has only proposed leaving the facade up and building houses behind it, Feibush said, and the community rejected that plan.

Universal Companies did not return several calls for comment.

As they say over at fark.com, “This is not a repeat from 2011”: Yet another news story about how there’s nothing new with the Royal and the neighbors are continuing to be ticked off.

Bill introduced in City Council for a zoning change that would facilitate the facadectomy. Story at PlanPhilly.

Another step toward the demolition.

Sadly it’s being demolished as we speak, with only the Facade remaining: http://hiddencityphila.org/2017/02/a-royal-loss-on-south-street/