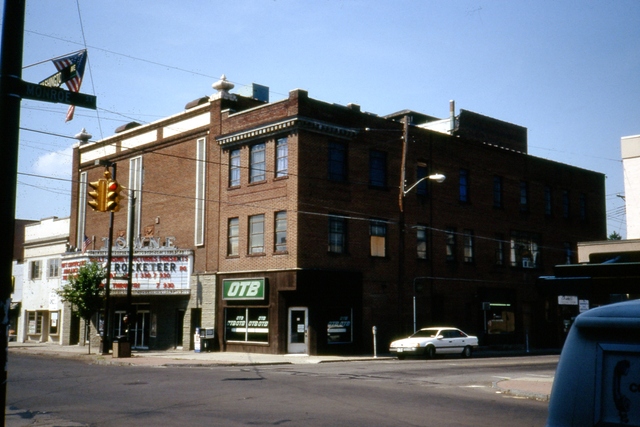 The Lyric Theater in Endicott, NY was built in 1917. It became the Towne Theater on February 10, 1967. It is now a live performance theater and is known as the Endicott Performing Arts Center.

This theater is more commonly remembered as the Towne Theater. It was renamed in the 40’s or 50’s. Loews was the last chain to run this house as a movie theatre. It closed in 1993 after the new Town Square 9 multiplex was opened. The Towne remained a single screen, and sat a total of 666 patrons—444 downstairs and 222 in the balcony. There was a small vaudeville stage and dressing rooms off to its side. After remaining closed for 3 or 4 years, a group took it over and renovated it into EPAC.
Their website is www.endicottarts.com

In the photo mentioned in the above comment, the man in the red shirt is Louis Ligouri the Executive Director of the Endicott Performing Arts Center.

The Lyric was renamed the Towne theater in the early 60’s, about the same time the State Theater in the Union District of Endicott became the “Cinema.”

This was my favorite theater when I was growing up in Endicott, back in the 50’s.
My brother found a back way in, thru the old hallways and down to the fire exit, located on the right hand side of the screen. Someone had to be inside to open the door and let us in!!
I only did this once, cause it was too scary for me to go thru the dark, old, spooky hallways to get into the theater.
Besides, I was afraid of being caught!!!

They had matinees every Saturday for us kids. $.25 to get in. Popcorn was $.10 and $.25. They would have a few shorts, which were mostly old Our Gang episodes. 3 or 4 cartoons and at least one movie and many times two. Lots of the old William Castle movies, starring Vincent Price. Saw The Tingler there and House on Haunted Hill.
Those were carefree, fun times, during those summers, a long, long time ago.

Here are two photographs of the Lyric Theatre from the January, 1918, issue of the trade journal Architecture and Building. The architect of the Lyric was Giles P. Greene, and the engineer was Elwyn E. Seelye, co-founder of this venerable engineering firm. Seelye wrote an article about concrete theater construction for the same issue of the magazine. Here is the section of it that describes the Lyric:[quote]“Because of the difficulty in getting structural steel two of the theatres which are illustrated in this issue are built with reinforced concrete and the balcony framing has been carried out in this material.

“The Lyric Theatre at Endicott, N. Y., is the first example of this type of construction. The building is at present built for moving picture use only but provision is made in the plan to add a stage. The proscenium opening has been constructed, the opening being at present closed in with a temporary tile wall which is plastered and which now serves as a picture screen. The stage house can be built at any time hereafter without interrupting the business of the theatre except for the short operation of tearing out the temporary enclosure of the proscenium opening. The facade of the structure is a non-bearing wall of brick. The side walls are built with reinforced concrete columns which carry the roof trusses, tile blocks being laid up between the columns. The roof is non-fireproof but the ceiling of the theatre is covered with metal ceiling.

“The feature of the construction is the balcony. This has a clear span between walls of 52 feet 4 inches. The construction consists of a reinforced concrete girder system with diagonal girders forming a figure K in plan. The arms of the K support cantilever girders as shown in the plan. This system of framing eliminates the use of large cantilever girders and reduces the moment on the .main girder. The cross girders and cantilever girders are framed over the main girder and are an integral part of the girder. The main girder which is 1 foot, 4 inches in width and 6 feet, 3 inches in depth is figured to carry a live and dead load of 210 tons. It is reinforced with 16 one-and-a-quarter-inch rods and 110 stirrups. The slab of the gallery is a cylindrical surface composed of reinforced concrete joists with clay tile fillers supported on the main girder. The steps are formed of cinder concrete floor fill with a cement finish for holding the seats. The balcony seats 336.

“The location of the projection room in the mezzanine under the upper portion of the balcony makes possible almost right angle projection of the pictures on the screen which gives the minimum of distortion. The location of this room is clearly seen in the illustration of the interior on plate 22. Provision has been made to convert the space before the projection booth into two boxes by the use of a removable section of rail, if a legitimate performance is given in the house. Giles P. Greene is the architect of this building, Elwyn E. Seelye the structural engineer and the contractors the Architectural Contracting Company.”[/quote]This building is remarkably plain for a theater of the period. Compared to the ornate theaters other architects were designing, Green’s Lyric seems quite severe.

There’s next to nothing about architect Giles P. Greene on the Internet. He was apparently a 1911 graduate of Yale, was from Honesdale, Pennsylvania, and designed the base for a WWI monument in Brooklyn. I can’t find anything about any other buildings he designed. Maybe he died young, before architectural tastes shifted to favor the relative austerity he displayed in the Lyric.

Architect Giles P. Greene died in 1941, and his obituary revealed why there is so little about him on the Internet. He practiced architecture only briefly, from 1916 to 1918. Following military service in WWI, he took to designing monuments and mausoleums. As far as I’ve been able to discover, he designed no regular buildings after 1918.

Most of the references to Greene on the Internet concern the Lyric Theatre. An article in the May 5, 1917, issue of The Record, the local newspaper for Endicott, Johnson City, and Union, said that Greene had arrived in Endicott and would remain through the construction of the Lyric, which was expected to open in early August.

This reopened as Towne on February 10th, 1967. Grand opening ad in the photo section.

some of the movies I’ve seen at the Towne