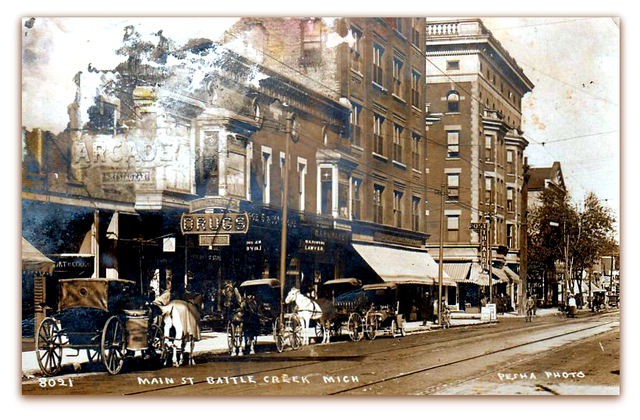 The Post Theatre, located on McCamly Street South between Jackson Street and Michigan Avenue, originally opened in March 1902 as a legitimate theatre and vaudeville house. The Post Theatre later turned to movies, and was still operating by 1945, according to the Film Daily Yearbook of that year, showing seating for just over 900. It was closed in 1948, and demolished in 1955.

I was there when this thing ended. We (my family) were called to take claim of anything we wanted from the theater because it had been sold. Exploring the empty theater with my young brother was one of the most unique experiences of my life. If anyone wants to hear about this I will gladly post more.

From the early 1900s a postcard view of the Post Theatre in Battle Creek.

The Post Theatre was considerably more than a vaudeville house in its early years. It was Battle Creek’s leading theater. Its ample stage was designed to accommodate the road shows of major productions, and the house continued to present such fare even after becoming a part-time movie theater. It even supported its own stock company for a while, and also presented musical programs such as a 1924 concert by Paul Whiteman’s orchestra which included the first local performance of Gershwin’s “Rhapsody in Blue.”

The Post Theatre opened on March 13, 1902, with Nat Goodwin and Maxine Elliot staring in a performance of H. V. Esmond’s play When We Were Twenty-one. The Post was mentioned in movie trade publications at least as early as 1915. Berenice Bryant Lowe’s Tales of Battle Creek says that the Post Theatre showed its last movie in 1948 and was demolished seven years later.

Here is a write-up and picture of the actual theatre from the Willard Library Archives http://dspace.willardlibrary.org/handle/123456789/16123

The photo currently displayed at the top of this page depicts Michigan Avenue in Battle Creek, about a block away from the Post Theatre on McCalmly Street. The sign reading “Post Theatre” was attached to the Post Tavern at the corner of Michigan and McCalmly.

There are three photos of the Post Theatre on this page at Water Winter Wonderland.