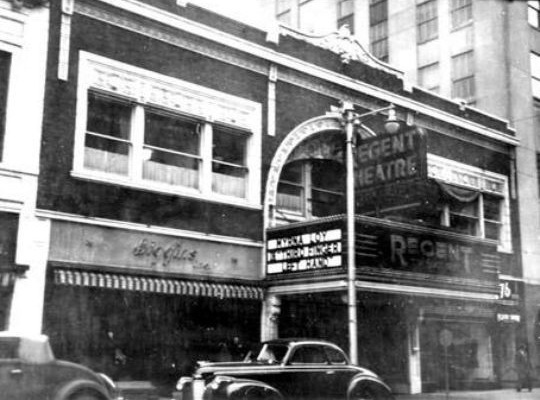 Various 1918 issues of the Michigan Film Review gave tentative opening dates for this theater of around July 1, around September 1, late September, sometime in October, and finally November 21. I’ve found no explanation of the repeated delays.

The Regent was built for investment partners Berry and Montgomery, and was leased to Harvey Lipp and Glenn Cross, who were to operate the new house in partnership with W.S. Butterfield. Glenn Cross was to be the manager of the Regent.

Lipp & Cross had been listed in the 1914 Battle Creek city directory as operators of the Rex and Queen theaters. In 1918 they were also operating the Garden Theatre and the Strand, according to items in Michigan Film Review.

This timeline of Battle Creek events says that the Regent Theatre closed in 1955, but it doesn’t mention when the building was demolished.