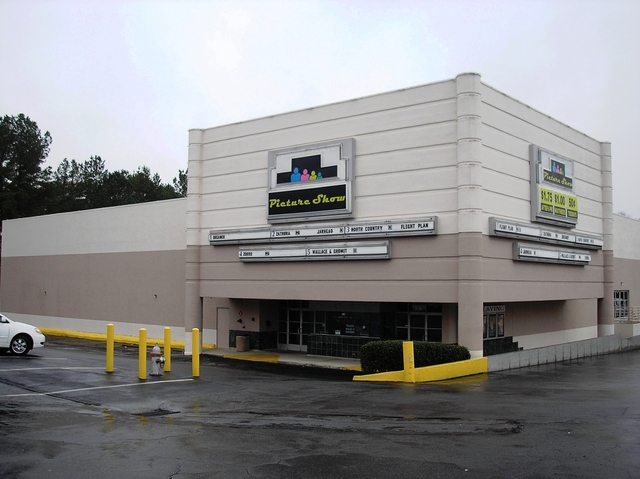 This unique and oddly appealing little showplace has had a tough time making a go of it even before it opened. It was initially designed to be a six screener, but not long after the foundation was laid, the property was acquired by Cineplex Odeon who chose to go with a sleek cubist design with five spacious and decorative auditoriums rather than the cadaverous earth tone aluminum monstrosity that the original owners had intended. The Merchants Walk area was very family oriented at the time and the Merchants Exchange was in a primo location sandwiched between a Chuck E Cheese and a Leaps and Bounds.

Opened August 21, 1987, the theatre ran a pretty steady fair of all ages flicks to fairly large audiences. As this area became more commercial and congested, the Merchants Exchange centre began to loose its luster. The tunneling and ball swimming attractions were becoming standard features in the playrooms of McDonald’s and enterprises such as Leaps and Bounds could not compete. Cineplex Odeon disappeared overnight leaving behind a bevy of cinemas with no management. Only a few of the Cineplex Odeon cinemas were acquired by the other circuits in town and the balance were shuttered. This was closed in 2000. It reopened in reopened in June 2002 but closed again in October 2002.

The current proprietors, Picture Show Entertainments changed both the name (Picture Show) and format (cinema and drafthouse) of the venue when it reopened March 19, 2004. Hopefully they’ll do well on it. It was a pretty neat place.

Dear Broan! I was just recently a manager of Rivertree ct. theatres in Vernon Hills Il. And I have just moved to GA. in hopes f finding another family theatre as tight as RVRT was here in the Marietta area. I was hoping you could help me with my quest. Picture Show seems promising.Please contact me with an info. @
Thank You!
Aukwah

Greatly Appreciated! Yes your are. It’s been some 20 years or so, when I use to attend a theater like this here in Cobb County GA. It was located in Smyrna, which is now a “Best Buy”. I use to take my 4 daughters to the moves back in the early 80’s. And as a single parent the $1.00 movie was all I could afford. Now I have 6 grand Children and “THERE YOU ARE”! Now I can enjoy some of the same fun with them. It’s a beautiful thang! Thank you PICTURE SHOW!

I don’t think they are running it as a Cinema/drafthouse. It’s just a dollar movie place, although a beautifully ran, clean dollar movie. It really is a nice place to see a movie, and although I’ve only been twice it’s been busy both times.

I was working there as a projectionist in 1988. So I think the opening date was more like 1987. Man, I could tell some stories about that place. I was working for Septum at the Holcomb Woods 6 in Roswell in 1986. Septum was bought by Plitt and soon after that Cineplex Odeon was in charge. As long as my check arrived I really didn’t care who owned the place. Septum started building and then stopped for a year or so. I lived in Marietta and wanted to work at Merchants Exchange when it opened. It seemed like it took forever. I transfered over from Holcomb Woods and worked there some before the place was open. Garth Drabinski(CEO of Cineplex Odeon) was there on opening day. We did pretty well at the box, I remember that we split all the product with the General Cinema theater at Merchant’s Walk about a half mile away. The lobby at Merchants Exchange was awesome. Yes, the original 6 plex design was scrapped for a 5 plex, but the sixth auditorium was turned into the lobby!(Septum loved those tiny lobbies). The lobby was truly great. The management kept changing, I was always bringing some new manager up to speed. The booth was also impressive. All 5 projectors where in the same room, one big room. It got pretty loud in there. I could go on and on….. I think many of us high schoolers had some real good times in that place. As I recall, at one after hours party, we drove a small car through the front door, up the handicap ramp and into the lobby. Crazy kids.

does anyone know of a theater in the cobb county/cherokee county are that does birthday parties??

This opened on August 21st, 1987 by Cineplex Odeon. I posted the grand opening ad in the photo section, which has an similar design as the Place Charest cinemas in Quebec City and Le Faubourg in Montréal.

Garth Drabinsky, who co-founded Cineplex with Nat Taylor was there on its opening on August 21st, 1987.