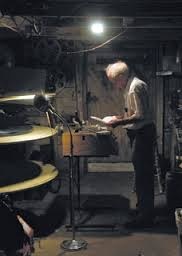 The Owen Theatre is a small town theatre located “Downtown on the south side of the Square” near US 60 in Seymour, MO. The 200-seat theatre was owned by Harold Owen and was built by his father in 1941, opening on June 6, 1941 with Jane Withers in Golden Hooves". This theatre was family operated and the Owen family also owned and operated the Owen Drive-In in Seymour. During the school year this theatre was only open on weekends.

The Owen Theatre & the Owen Drive-In were both closed in 2013 upon the death of Harold Owen.

Refurbishment began in 2018 by the local arts council and it reopened in 2021 showing seasonal movies and live musical performances. The seating capacity has been reduced to around 150-seats.

Longtime theatre owner of the Owen Drive-In and the Owen Theatre passed away in 2013. Neither the theatre or the drive-in are open. Harold Owen was 93.

Counting the number of lots up the block from Don’s Pizza (110 W. Washington) to the Police Department (entrance at 124 W. Washington, but also occupying the adjacent building at 122) I’d surmise that the correct address of the Owen Theatre is 120 W. Washington Street. Maybe Google Maps can find that, because the sure haven’t been able to find the Square.

Google maps still places the address down the block.

Wesley Shean opened the new Seymour Theatre on April 2, 1934 with Lee Tracy in “Washington’s Merry-Go-Round.” George W. Owen, whose movie and vaudeville career started in 1907, later took on that theatre and decided to build an entirely new theatre due to weaknesses of the existing building. Ground was broken in December of 1940 for Owen’s new building. People were encouraged to send small stones and he would incorporate them in the construction. (The Seymour Theatre completed its run on June 3, 1941 with “The Great Dictator.”)

The new theatre opened under the banner of the new Owen Theatre at Seymour launching June 6, 1941 seating 400 with 150 of the seats in the balcony. The first film was Jane Withers' “Golden Hooves” supported by the Three Stooges short, “From Nurse to Worse,” the Pete Smith short, “Third Dimensional Murder, and Allan Lane in the first episode of the “King of the Royal Mounted” serial. (Originally announced by scratched was Jimmy Stewart in “Pot o' Gold” and “Boobs in Arms.”) That was the warm-up for the Jun 8-10th showings of “Gone with the Wind.”

The theatre was still operating in the 2020s.

The theatre’s Facebook page shows classic movies are being screened currently. A grand re-opening is planned for May 5 2022.