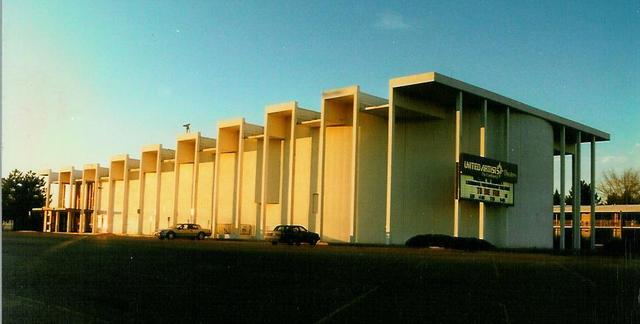 United Artists' Continental Theatre stands as Denver’s last remaining giant screen movie house. Along with the Cooper and Century 21 theatres, The (then) Commonwealth Continental was one of Denver’s premiere showcase theatres when it opened January 26, 1966 with Charlton Heston in “The Agony and the Ecstacy” and continued throughout the 1970’s and 1980’s, with a screen that measured 35'x 83'. Seating for the theatre was originally 916.

The theatre played host to dozens of large screen 70mm presentations over the decades including “Die Hard”, the original “Star Wars” trilogy, “The Abyss”, and “Terminator 2”. With the right booking, the Continental Thetare could be responsible for 35% of a film’s business in the city of Denver.

In 1983, during its run of “Return of the Jedi”, the theatre fell victim to a fire that destroyed part of it. The following day’s Rocky Mountain News contained a front page photo of theatre workers rushing the 70mm print of “Jedi” out of the theatre to safety. During the fire, all of the projector lenses (except the 70mm lens, which was in use) were destroyed. The new lenses for 35mm put to use after the fire were inadequate for the theatre’s long throw distance and, because of this, all 35mm presentations on the screen would require severe masking on all four sides to accommodate the smaller image size. The estimate is that 35mm reduced the screen size to 23'x 55'.

In 1994, for an exclusive engagement of “The Shawshank Redemption”, lenses from a recently closed drive-in were put to use at the Continental Theatre for the 35mm presentation and all films shown since 1994 have again utilized the full screen size.

In November 1995, the Continental Theatre closed for an extensive remodel/expansion. The theatre reopened in June of 1996 with five new screens (several THX approved) built around it. During this remodel, the seating was reduced to 869 to accommodate new handicap accessible seating. In 2008, the number of screens was increased to ten.

I was the G.M. AT ALL THE THEATRES

Does anyone remember if Disney’s “Tron” played here in summer 1982 and/or during its autumn ‘82 re-release?

the continental originally opened 1/26/66 with the agony and the ecstasy. opening night was a benefit performance for the metro association for retarded children. regular performances began on 1/27/66. I am putting together a series of books on the history of the denver area’s drive-ins and indoor theatres (including a full booking history on the continental.) if anyone has any questions on the subject, please feel free to contact me at . I’ll be happy to share my research with you. Thanks ! Ken Mitchell

Do any Denverites recall which summer 1985 movie played the Continental? “Cocoon"? “Silverado”? Disney’s “The Black Cauldron”? Other?

I’ve always thought it ironic that the 70mm projectors installed at this complex were installed in one of the side theaters, not in the RPX house that once hosted 70mm screenings.

I’ve put together a booking history for the Continental, from 1966 up to 1978 so far, in case anyone might like to know when a particular movie played there. I’ll be happy to share my research with you. Take care – Ken Mitchell ()