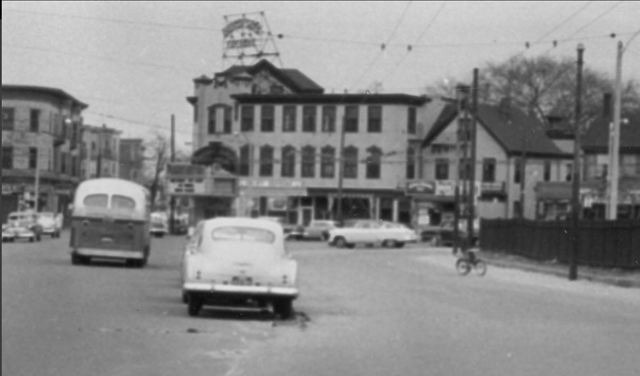 Later, however, we also went to the Fields Corner, Codman Square and Adams Theaters.

These chaotic matinees cost twelve cents on Saturdays and twenty-five cents on Sundays and were packed with a huge assortment of un-chaperoned, undisciplined screaming kids who couldn’t sit still if their life depended on it. And for some strange reason, these demons, excluding myself of course, took great pleasure in running up and down the carpeted aisles; making noise and scaling flattened popcorn boxes at the movie screen. It was fortunate that there was a heavy steel door protecting the unseen projectionist, because occasionally he would have some problem with the projector. Maybe the film would jump the sprocket, or the bulb would blow out or the picture may go out of focus. When anything occurred out of the norm and the matter wasn’t taken care of within seconds, his life would surly be in jeopardy!

Older guys, most of them deranged and acting under the guise of ushers attempted to take control of this bedlam, but usually to no avail. Although every now and then, the side exit door would be suddenly opened and two or three of these culprits would be unceremoniously tossed out into the afternoon sunshine. Of course I was a good conscientious parochial school kid and never involved myself in any of this ill-mannered activity! But I sure did enjoyed watching it!

The movies, shown at those matinees in the forties and fifties, opened up a whole new world for an impressionable lad like myself. Overlooking the turmoil inside the theater, one could watch two full-length movies, a newsreel, a cartoon and whatever other crazy feature the theater owner could think of to draw in more young patrons. On special occasions, I would receive a numbered ticket; one through ten, and this would put me in the running in a crazy zany pre-filmed race. There were ten numbered contestants racing and if the winner represented the number I held, I would go up on the stage and claim my prize. I believe I won a boxing bag once!

My friends and I loved the war movies popular at the time. We especially loved John Wayne in films like “The Flying Tigers”, “The Flying Leathernecks”, and my favorite, “Sands of Iwo Jima” with John Wayne playing the tough Marine sergeant, John Stryker. We also loved the many cowboy movies he starred in, namely “She Wore a Yellow Ribbon”, “The Searchers”, and many others.

Whether it was a war or a cowboy movie, each exciting scene would be reenacted on the way home from the show. If we had come from the Dorchester Theater, the reenactments would take place in the miniature hills of the Town Field. The town field was located across the street from the theatre. Caught up in what they had just experienced in the theater, we would talk in deep voices in an effort to imitate their heroes and create the sound of gunfire by making guttural sounds.

How we all loved John Wayne! After viewing one of these war movies, had they been of age, they would have willingly gone down to the Recruiting Office and immediately enlisted in the Marine Corps! In our young impressionable eyes, John Wayne was invincible a true hero.

In our day we never went to “the movies”, it was always called “the show”.

To Ron Newman- yes, my recent comments under the Adams Theatre in Quincy about the “Fields Corner Theatre” actually refer to this one, the Park Th. in Fields Corner on Dot Ave (east side) across from the big playground. However, my memory is that it was closed for awhile before being twinned and reopened.

I found the MGM Theatre Photograph and Report form for this house. The report is dated May 1941. It indicates that the Dorchester Theatre was not a MGM customer, that it had 850 seats, all on one floor, that it was in “poor” condition and that it was a Nabe. The rather poor photo (mine is a Xerox) had on the marquee Barbara Stanwyck in “Stella Dallas”; hanging from the marquee is a banner which states in big letters “25th Anniversary”, with some additional illegible words. That would indicate the theatre opened in 1915 or 1916. I never went in it, but went by it all the time on the bus from Quincy Square to Fields Corner which ran before the Red Line was extended to Quincy.

Larry Murphy above mentions that he, as a kid, never went “to the movies”, but went “to a show”. This reminded me of a friend who grew up in the far west suburbs of Chicago in the 1950s who always referred to movie theatres as “shows”, i.e. “there is a beautiful Show over in Aurora called the Paramount”. The theatre itself was a “Show”. I have heard this expression a few other times, including in our own Boston-area.

Hello Larry Murphy;Thanks for a re-live of Saturday mornings in my childhood only at the Rialto Th. in Lowell,Mass. Check the Rialto Th. on C.T. to checkout or similar childhood paths. Thanks again. Until soon,Hank Sykes

Many people may remember the Dorchester Theatre on Dorchester Ave. at Park Street. Opened in about 1915, this theatre originally had 850 seats. By the 1960s it had become the Park Cinema, and then the Park Cinema 1 & 2, after it was “twinned” and divided into two theatres. The lobby entrance was at the corner in the location of the current Radio Shack and was marked by a variety of signs and marquees over the years, as can be seen in the accompanying photo. The Park Cinema was open until the early 1980s, and the theatre auditorium still exists, although divided into two stories of commercial space. The large upper floor is vacant, and the original pressed metal ceiling and much colorful, Art Deco stenciled painting still survives, some of it shown here.

I can’t tell you how happy I am to see this picture. I have had many discussions regarding the name of this theatre. I also called it the “DOT SHOW”. Everyone insisted that it was called the Park and not the Dorchester Theatre. Larry Murphy’s description of Saturday afternoon is wonderful. Just as I remembered.

In a 1918 Boston street directory, the Dorchester Theatre is listed at 1524 Dorchester Ave., at Park Street.

I went to “the show” almost every weekend in the early to the late 60’s. For 20 to 35 cents you got a whole afternoon. Coming attractions,cartoons,newsreel,a movie,serial,race,& another movie. Jap(Godzilla,Mothra,etc.)sci-fi,John Wayne,Elvis,Beach Party,or horror movies. You saved your different colored cards with the race numbers from week to week & tried to match them to the win. The snack bar had flat-topped ice cream cones. Kids sometimes lay in the aisles when it was really crowded. The ushers would shine a flashlight at you & make you “take your feet down” off the back of the chair. An older kid from my neighborhood(Kimball St.)named Billy Butts was an usher for a while. I saw “Night of the Living Dead” there when it came out in 67 or 68. Also Lucky Strikes bowling nearby. John O

The Dorchester Theatre was named such until about the very late 60’s when it closed for renovations and reopened as The Park. The outside overhead marquee had been removed as well as the old fashioned box office. Inside renovations were a redesigned lobby/snack bar and re-upholstered theatre seats as well as a 75 cents admission. I believe they also went to a 1 movie format at that time giving the usual less for more. I don’t remember when they went twin nor do I think I ever attended. I do remember peeking inside once when it was being used as a furniture store and the theatre now a sales floor was still slanted ! JOL

I used to clean the sticky floor when I was 10 at the Dot. I lived at 310 Adams St next to Cosgroves Milk. I remember the night the Lucky Strike Bowling burnt down the 1st time. Always went to the Dot on Sat to win a prize on the movie races. On Sat there was always 1or more cartoona, a serial Previews and a wester or horror movie. This was al for a dime. My mother used to go on Mon nights for her dish. It was a grand old dame of a theatre. Just 4 walls rugs(Dirty),and we used to tthrow popcorn boxes at the screen and blow into JuJubes boxes like whistles. We used to walk up and down the aisles begging for money to buy something. Sundays was always The Fields Corner theatre or sometimes the Adams which were 25cents and 2nd run from downtown. Had yo go to the Adams for all Disney flicks. Left there in 1952 and we moved to Scituate. We had 1 theatre the Playhouse. Big, Clean and 25 cents. This was a privilege because it was 1st run with Boston. The 1st movie I saw there the Day The Earth Stood Still. When Cinemascope came there in 1853 they were the 2nd South Shore theatre to install. They put in a very large screen and stereo sound. What fun.