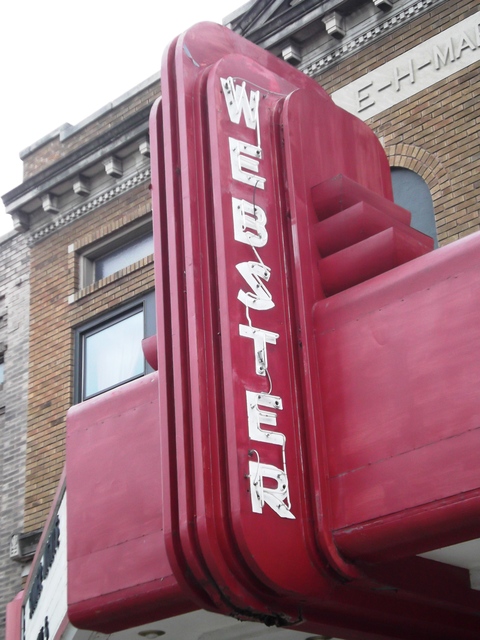 The original Orpheum Theater opened on November 29, 1909. It operated as a vaudeville theater until 1916 when the Orpheum Theater moved to this new building right next door named the E. H. Martin Building, and began showing silent movies. In the 1920’s the ‘new’ Orpheum Theater was remodeled and renamed the Granada Theater. The main floor seated 600 and the balcony held 150 patrons.

It re-opened as a non-profit community theatre on September 19, 2014. The Art Deco style marquee has been fully restored. Equipped with digital projection and sound, movies are screened on the largest (non-Omnimax) screen in Iowa. In the Art Deco style lobby, uniformed staff greet patrons, ticket prices are family friendly.

A tiny glimpse of the Webster Theater can be seen in this photo. It looks like the original Orpheum Theatre building is still standing next door. They could put a second screen for the Webster in there and have a hundred-year-old theater, sort of. But then, even having a 93-year-old theater is pretty impressive these days.

In early 1909, E. H. Martin’s son bought the Unique Theatre. A few months later the July 3 issue of The Improvement Bulletin reported that E.H.Martin had begun construction on a new building for the Unique Theatre. As there is no evidence that the Unique ever moved from its original location, I suspect that this project became the first Orpheum instead.

The project was designed by J. R. White, Webster City’s best known architect of the period, who had designed the Martin Telephone Company building in 1904. As Martin had hired White to design at least two projects prior to building the second Orpheum, it seems likely that he would have hired White for that job as well, though I haven’t found documentation that he did. Although the second Orpheum is more ornate than the first, the two buildings have certain elements in common, most notably the oblong, horizontal clerestory windows near the top of each facade.

The September 16, 2018 issue of the Los Angeles Times ran an article on Webster along with changing demographics of the area. Read entire article here.