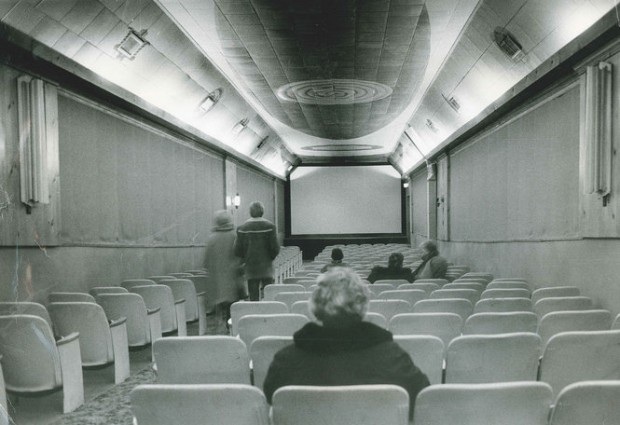 Located in the village of Manlius, NY in the greater Syracuse metropolitan area. Originally opened as the Strand Theatre on December 6, 1918. Admission was 8 cents or 3 for a quarter. It was a ‘shotgun’ style theatre, which was not uncommon in its day. It competed with two other movie theatres in Manlius: Star Theatre of 1912 and the Marion Theatre of 1914. Sound was added in 1931 and the Strand Theatre was renamed Seville Theatre. It was also at some point named London Theatre.

In 1985 there was a major renovation during which the center aisle was moved so that two people sit on the left of the aisle and 5 or 6 on the right. The current name was assumed around this time. The theatre went digital in 2012.

This is a rare still existing example of the â€œshooting galleryâ€ style of theatre construction occasionally seen in the late 1920s. The Manlius has a long narrow auditorium with a fixed size screen that is barely 1:1.85. At one time, scope films were shown thru a Magnacom and â€œletterboxedâ€ on the screen, although quite often the film spilled over on the walls. I donâ€™t know if this is still the practice.

The theatre was very popular in the mid-to-late seventies and early eighties, during the last great art film era. It was at the Manlius that I was introduced to films like The Tin Drum, Eraserhead, Wifemistress, Return of the Secaucus Seven, Tree of Wooden Clogs and many others. By the late 80â€™s, owner Nat Tobin sold the screen to a local grocery store owner who switched the programming to sub-run. He couldnâ€™t make a go of it, though, and attempted to auction the theatre off in 1990. I attended the auction hoping to buy it. However, it was obvious that none of the few bids submitted would be sufficient, so he wound up buying it back himself for a bid of $90,000.

The last time I was in the theatre, which was many years ago, it was in deplorable condition with a large puddle of water covering the carpet in the first few rows of seats (but it was still open nonetheless). I believe Nat Tobin has the house back now; he also had the Westcott until a few years ago.

I first took over the management of the Manlius Art Cinema in 1992 so I was not involved with the failed auction. Scope films are still letterboxed due to the screen size and building limitations. We are quite proud of our place in the community and the staying power of the cinema. It is the oldest in Central New York and one of the oldest cinemas in the country.

I love coming across cute little cinemas like this.

First time I’ve seen what MarkNYLA in his July 21st, 2008 comment calls an example of “shotgun style theatre construction” still in operation. (Are there others?)

Reminds me some of the Monarch Theater in Chicago (that is now a car wash?!).

Another I find cute which is also old and still operating is the Fountain Theatre in Mesilla, New Mexico.

Does anyone else have their own cute favorites to share?

Uploaded photos from 1940 when fire gutted to the theater. When rebuilt additional length was added. Building is now 17 feet by 100 feet.

Just turned 100. Can’t be too many operating venues that can make that statement.

I notice in the ad posted from Sept. 9, 1948, in the photos, that Doris Day’s name is not mentioned in the ad for Romance on the High Seas, her first motion picture. Soon she would be a top star and still alive today, while Jack Carson, Don DeFore, Oscar Levant and Janis Paige are largely forgotten (but of course not forgotten by members of this site, lol)

Jack Carson appeared in many romcoms, often with his buddy, Dennis Morgan and, dramatically, in the film Cat on a Hot Tin Roof. Don Defore starred in the Christmas film classic It Happened on Fifth Avenue and as “Thorny”, the next door neighbor, on the Ozzie and Harriet TV Series. Oscar Levant showed up in many musicals memorably in An American in Paris. Janis Paige starred as “Babe” in Pajama Game on Broadway and is remembered for being “out performed” by her opening act in Las Vegas, Sammy Davis Jr..

The Manlius Art Cinema will have new operators next week, according to a story at Syracuse.com. Nat Tobin and Eileen Lowell are selling the place to Dan Chapman and Joe Ori, owners of A.W. Wander, a nearby restaurant. The article said the theater holds 200 seats and is the oldest cinema in Onondaga County.