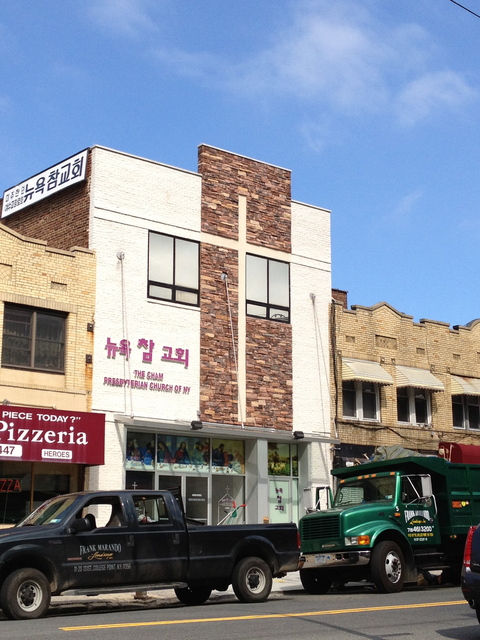 I found out about this theater via a post from Warren on the Bayside Theater site. According to his post, the Victory was a mid-size neighborhood cinema that had 1,274 seats and was run for some time by the Skouras organization. Warren and others then posted that the place had been at varying times a bowling alley, a bingo hall and a flea market. I live in the vicinity and decided to take a drive by to see if any of the original theater survived. The building still stands on 32nd Ave, a small commercial strip in a residential neighborhood just East of the much busier Frances Lewis Boulevard, and is currently occupied by the Cham Presbyterian Church of New York.

The marquee has been replaced by a store-front style awning and a rolldown gate seems to be perpetually locked in place. It is when you walk around the block and notice the faded art-deco “New Victory” sign painted on the side of the building and see the balcony fire escape leading down to an alley behind the structure that its past becomes very obvious. I assume that “New” was appended to the theater’s name later in it’s existence, but couldn’t find any history of the theater to support that. If you look through the front gate, the word “Victory” can be seen in the floor tile work of the outer lobby.

I was able to search through building records at NYC’s Dept of Buildings website (with the assistance of the online NYC OASIS satellite mapping project to identify the block and lot) and found that the building was erected in 1929 (the original building permit dates to 1926) with alterations made twice in 1930 and again in 1957, 1968, 1971 and 1987. Violation records show that in 1989, when the building was owned by Bayside Hall Inc, a fine was imposed for operating a “place of assembly” as if the building were a flea market when the Certificate of Occupancy was for a “bingo hall”. Further, in 1993 and ‘94 there are violations for the hazardous condition of the exterior facade including a citation for the collapse of the marquee - which was apparently being held up off the sidewalk by wooden boards and police barricades! Other violations in the '90’s involved broken and missing plaster and exposed steel in the interior.

The church has several plans filed for alterations to continue the conversion to church use, including significant remodeling of the interior and “conversion of second floor to church use” – perhaps restoring a balcony that had been sealed off from the rest of the auditorium at some point? I found nothing about a bowling alley, but if that was the case, I wonder how much of the interior elements remain from the original configuration.

“Dazzling Crystal Lobby,” eh? No trace of that exists in the church that now occupies the building. I’m sure anything either dazzling or crystal was removed when the place was converted into a bowling alley in the late 1950’s!

Thanks, Warren. With your permission, I’d like to include this shot (as well as the ad you posted on 12/12) in my photobucket scrapbook for this theatre – despite the murkiness!

It’s interesting that the renovations to become a bowling alley cost $450,000. When the theatre had its last hurrah the renovations cost in excess of $100,000, a figure which it proudly touted in its ads. For a period of time they also had dish night, which I thought went out with the 40s.

The only giveaways I remember were done by the Century Circuit. When I attended the Bellerose Theatre I remember getting Currier and Ives Prints. Couldn’t put a date on it. I think maybe Skouras also did this.

I was born in 1939 and lived about 5 blocks from the Victory Theater.On Saturday’s my mother would give my brother and I a quarter which got us both in (12cent each and left a penny to get a strip of button candy for the show – which by the way lasted from noon till 4-5PM.You’d see two movies, 4-5 serials, a ton of cartoons, and on some days get an ice cream – all for 12cents!!! The theater was never high end. It was lovingly called the “Itch” and the local comment was “you go to the itch and you come home with the scratch” The theater had a balcony and a nice marble staircase leading up to it. The rest rooms were upstairs off the balcony and we would climb out the bathroom windows onto the marquis. There were two opera boxes along side the balcony which I never recall being used. I think it was originally part of the RKO chain along with the Keiths and Roosevelt (both in Flushing NY) and the Bayside Theater on Bell Blvd also in Bayside. Movies would spend about a week in each theater with the “Itch” getting the movie at the end of the chain.

I don’t know at what point the Victory was Skouras but I do know that it was an independent in the 1950s when I first became aware of it. Newspaper ads were always independent of the Skouras group ads.

I uploaded a number of ads and one vintage image of the Victory Theatre as it looked when it first opened. A number of these (including the vintage image) were poached – with permission – from former CT member Warren G Harris, who had attached links (now dead) to these images throughout the comment history. In any event, I hope that these ads help to flesh out some of the history discussed in this thread over the years.

I happened to be passing through the neighborhood today and noticed the facade underwent a bit of a remodeling job by the church, including new entrance, awning and brick-facing. I snapped this quick cell-cam photo from my car window.

I didn’t not pull over and check it out, but I’m guessing this work probably involved the removal of the “VICTORY” cement floor inlay that remained from the old outer foyer – depicted in this photo from 2005.

The reality is Victory would be an appropriate word to be associated with a church. Victory over death through Christ. In the 2005 photos there are lambs. Christ was the lamb of God. We are his sheep, etc.