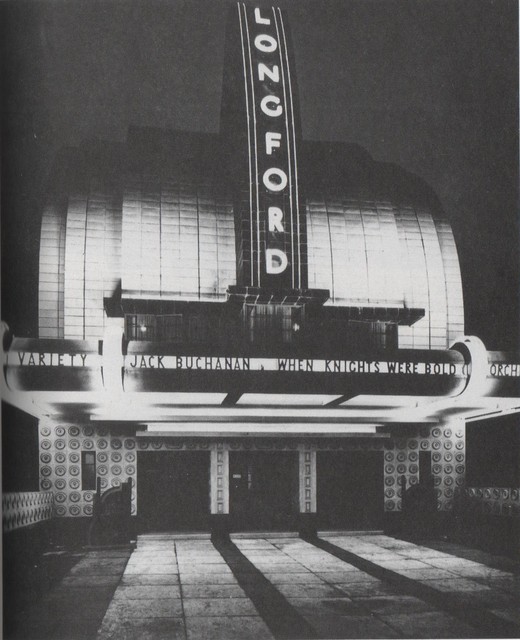 Located in the Greater Manchester suburb of Stretford. The Longford Cinema was opened on 12th October 1936. This fabulous building lies on the junction of Edge Lane and Chester Road, opposite the new Stretford Arndale shopping mall. There are two entrances to the building, the main one on Chester Road which was set back from the road in a courtyard (now gone in a road-widening scheme which has brought the entrance to the edge of the pavement) and a secondary entrance on Edge Lane. It was operated by the Jackson & Newport Ltd. chain.

It was taken over by the Newcastle based Essoldo Chain in August 1950, and renamed Essoldo. It was closed in September 1965 and was converted into an Essoldo Bingo Club, later becoming a Top Rank Bingo Club. This closed in the 1990’s.

Other than that, I know little of the building’s history and would love to get a peep inside. Given that there is a large shopping centre opposite, there are few residential units surrounding it and it sits next to Stretford Metro stop, I’d like to think that there’s hope for the building yet.

The former Longford Theatre is a Grade II Listed building.

heres an exterior shot from the mid 90’s when ot was a bingo hall, its a crying shame that this amazing building sits empty, it still has an amazing streamlined deco interior
View link

A few more pictures of the Essoldo – large size!:

Just to let you know I have set up a website on the old Essoldo / Longford cinema building in Stretford. Its at

It’s just an experiment really to see if anyone has any answers as to whats going on and what its future might be and where this might lead. I’d be gratefull if you could have a look if you are interested and leave me any feedback on content / news etc.

Just to let you know that there is some progress with this building. Visit www.longfordcinema.co.uk for regular updates.

Another photo of the circle area when used as a bingo hall here:–

The disused Essoldo cinema is an art deco landmark which intrigues passing commuters. Paul Taylor asks can there be a happy ending for the old movie house?

Some still recall how the crowd at the Longford Cinema cheered the newsreel of Neville Chamberlin returning from his meeting with Hitler in 1938, declaring â€œpeace in our timeâ€. They also remember how Longford hosted the Halle Orchestra when it was bombed out of the Free Trade Hall in 1940 after the promise of peace had yielded to war. Generations go misty eyed about how they found romance at the movies.

But these days, the Longford later Essoldo cinema, evokes mainly curiosity in the thousands who drive past it on Chester Road, Stretford. What is the history of this strange, grand art deco picture palace? And 14 years after the doors closed, what is to become of it?

â€œApart from the fact that itâ€™s pretty special architecturally, itâ€™s one of the few buildings like this still standingâ€, says Matthew White, who set up a website devoted to the cinema. â€œA lot of the response is from people who sneaked in as a kid, or met their future husband and wife there and sat on the back row in the kissing seatsâ€. Those responses come as from as far afield as the USA. Verna Nelson in Modesto, California, recalls how her mum had such fun working at the Longford. Christine Hartley, in Italy, remembers how her brother, now living in Mew Zealand, was one a projectionist at the Longford. â€œWhenever I visit Stretford I take photos of the old Longford and post them to himâ€, she writes. â€œHe says it breaks his heart to look at themâ€.

But the owner, a businessman from Sale has a message for the doomsayers who believe the building is being left to rot. â€œThere have been rumours that itâ€™s going to be demolished or turned into flats â€" all sorts of thingsâ€, he says. â€œItâ€™s still destined to be a family entertainment centre. That was the idea and thatâ€™s what we want to follow through with. Weâ€™re looking at a couple of groups â€" both theatre groups â€" to use the buildingâ€. To concerns that the building is looking shabby, he says â€œDonâ€™t be confused by what you see outside. The auditorium has a complete re paint and is looking very niceâ€.

The cinema opened in 1936, the curvy design intended to contour the design of a cash register. There was an expansive concourse leading to the front entrance, a foyer of Venetian marble, and the auditorium was decorated in tangerine and silver-blue art deco designs. The Longford was the first building in Britain illuminated by neon tube lighting, there was under seat heating, a cafe with seating for 146 and space in the auditorium for 2000 film goers. The first film shown was Tudor Rose, starring Nova Pillbeam, and patrons would pay 6d for a seat in the stalls, and 3s in the circle. A young Julie Andrews performed at Sunday concerts on the stage. â€œIt was quite a big deal when it openedâ€, says White. â€œIt was meant to be a luxurious experienceâ€.

In 1950, the Longford was bought by the Essoldo group and renamed. But TV eroded the cinemasâ€™ clientele and the last picture show at the Essoldo was in 1965, and Ladbrokes turned it into a bingo hall. In 1979, the widening of Chester Road meant it lost its grand concourse, and the building closed in 1995.

â€œMy early memories were of seeing Ben Hur and Dr No there with my parentsâ€, says John Ryan, 55, from Sale who took video footage of the Essoldo interior when it was thrown open to potential buyers in 1995. â€œItâ€™s a huge accommodation. It was known as a â€˜super cinemaâ€™, and all the super cinemas, like the Plaza at Stockport, had large cafes. I made a video and was selling it on eBay. I had people e-mailing me saying they often wondered what it looked like inside. Thereâ€™s a huge curiosity about the placeâ€.

Local councillor Steve Adshead, 50, says fears about the buildingâ€™s future â€˜are the bane of our livesâ€™. â€œItâ€™s a question everyone in Stretford talks aboutâ€, he adds. â€œThey see it going to waste – a big building which could be a fantastic resource for the community. It is a listed building and heâ€™s required to maintain it in a reasonable condition, and as long as he does that, the council have no powersâ€.

The owner is a lover of art deco architecture who insists that work goes on to bring the Essoldo back to life. â€œIâ€™m hopeful that by the end of the year itâ€™s going to be looking a lot differentâ€, he says. â€œWeâ€™ve spent and awful lot of money. Now itâ€™s a case of finding the correct partnershipsâ€.

The Channel M report has now come out and is sat on the web. You can see if by following this link View link

There isn’t a new footage as thought, just loads of stuff recycled from the website and youtube but usefull none the less.

a good video off YT that is a sort of vurtual tour of when it was a bingo hall ! https://youtu.be/yGt6v-ZWTHA