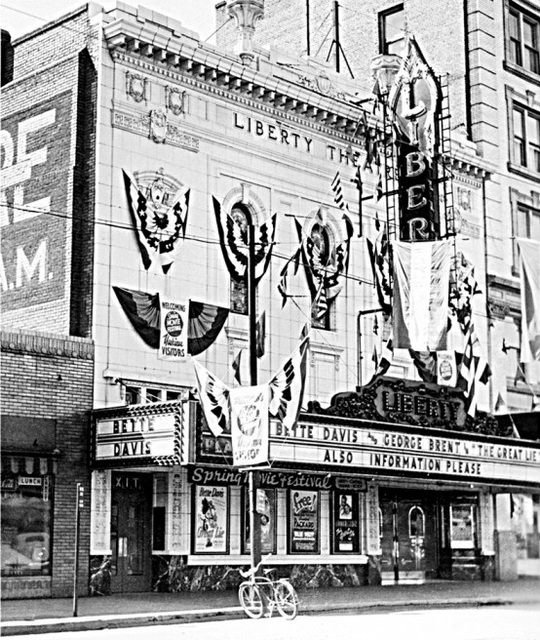 The Liberty Theatre was open from at least 1920 and seated 1,000. It was located on Yakima Avenue between Third and Fourth Streets. The theater operated into the 1960’s before closing, and was afterward gutted and converted into a bank. Any additional information on the Liberty Theatre, including its current status (as it apparently no longer houses a bank), would be appreciated.

This is probably another theater designed for Jensen and Von Herberg by Seattle architect Henderson Ryan.

The Liberty Theatre at Yakima was one of the planned construction projects for Washington state listed in the April 5, 1919, issue of Domestic Engineering.

The 1919 project I cited in my previous comment was not for the original construction of the Liberty Theatre, but was probably for alterations. History Link says that the Liberty Theatre opened on March 12, 1918. It was the first theater built by Frederick Mercy, who by that time already controlled the four other theaters in Yakima: the Majestic, the Empire, the Avenue, and the Yakima. In 1920, he built the Mercy Theatre, later the Capitol.

Mercy must have overextended himself, as by 1920 he was operating the theaters in Yakima in partnership with Jensen and Von Herberg.

The April 13, 1918, issue of Motography had an article about the new Liberty Theatre in Yakima (scan at Google Books.)

When the new Liberty opened on March 12, 1918, an earlier house also called the Liberty was closed and subsequently demolished to make way for the Mercy (now Capitol) Theatre.