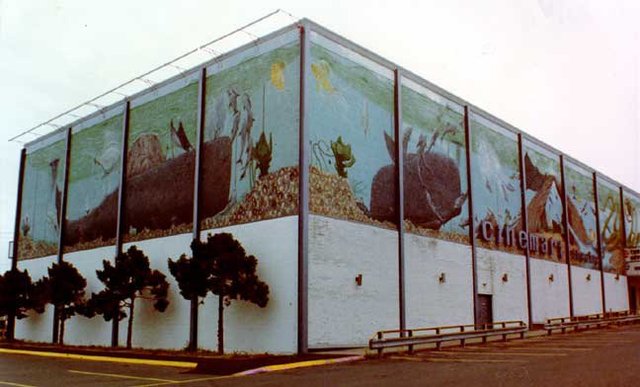 The Cinemart was a large single-screen theater that opened in the Hamden Mart Shopping Center on Dixwell Avenue in the late-1960’s. I’ve seen it advertised as an RKO Century Warner location, and later as a National Amusements Cinema. It was twinned sometime in the late-1970’s-early-1980’s. It closed in the early-1990’s and was converted to retail. It currently houses a Blockbuster Video, a Chinese buffet, and other shops, but you can clearly see that it used to be a movie house.

The Cinemart was twinned in late 1977, if I recall correctly, and I believe the last feature to play there when it was a single screen was “The Deep.”

Unfortunately the twinning job was somewhat botched as the seats were never realigned to face the screen, leaving them all to face the blank corner where the center of the single screen used to be.

The Norelco projectors were awesome – I was told they had to be lowered in by crane before the building’s roof was installed. God knows how they got those big suckers out.

I worked there for a brief time . .out of all the theaters that’ve gone dark around me I miss that one the most.

Does anyone remember that the building had a massive undersea mural painted on it in the late 70’s making it look like an aquarium ?

I worked at The Cinemart starting in 1973 as an usher gradually taking on various managerial responsibilities such as inventory and payroll. Upon graduation from Franklin Pierce univesity with a BS in managIement I stopped in to visit and left as the assistant manager. I was transferred in Sept. 1979mtom their aorange location. I was a newlywed and my wife and I were communicating through notes as we worked opposite shifts so I had to switch careers. Blockbuster went out of business in 2010 and that site is now occupied by Men’s Wearhouse, various retail stores, a Chinese restaurant and an Aspen Dental office. I could have sworn the original Showcase carpeting was still there. It was my first and greatest of careers. The closest theatre left was in the next town over: North haven and was also a National Amusement Theate and eventually was sold to RAVE Theatres amd the Orange location also closed. Back then, movie theatre employees were like family and the Cinemart was no less.

I recall being taken there as a child to see The sound of Music and Mary Poppins. Admission was a whopping $3.00 while the second run houses were between 75 and 99 cents. The Cinemart was thhen the classsiest theatre in the area, with seating for 1151 until they twinned it which ws a botched job. You could easily hear the dialogue from the other twin. Technology and architecture have taken care of it.

Some of my fondesr memories come from there.

I hope this conjures up some pleasant memories from other readers.

I worked as an usher at the Cinemart in 1968-69; starting the week after a year long run of Sound of Music. The Theater was really gorgeous – a true roadshow house. We had gala openings that might include a huge Hammond organ playing in the lobby, or a marching band in the parking lot. The ushers wore tuxedoes and white gloves, and since the seating was reserved, every usher had to learn the alphabet backwards so you could walk directly to the correct row. Bill Decker was the manager and he was a real showman from the vaudeville and live stage era. RKO really hung with musicals and roadshows, which required long engagements, and business started to suffer. I remember that “2001” played for three months and by the end about the only people around were the staff. At least it gave us time to figure out what the movie was about. After college I contacted Bill and he immediately gave me a job training as manager under Harry Gaetano in summer of 1975. That october RKO gave me the White City Cinema in Shrewsbury, MA, and I later transferred to the RKO Merritt in Bridgeport. While there I managed the eight theaters that RKO still had in their Connecticut Division.

I love the photo of the Cinemart. I commissioned the Rock and Roll Mural for WPLR-FM back in the late 70’s and it because a very popular destination as a result. We had a wonderful time , starting with me going to New York to negotiate the project with National Amusements I recall. The mural was 3 dimensional with a different view from each side, looking through the aquarium. Pebbles on the bottom had the faces of hundreds of rock stars from John, Paul, George and Ringo, the Stones, Hendrix and so many more. The painting was don by local super-graphic artists Tony Falcone and the late Dan Daddona. Then came the “Ghost Parking Lot” a group of cars in which driving deaths occurred, covered by concrete and ringing the parking lot. An then the mural was gone. I never found out why it was removed unless the building was sold. I still operate a business down Dixwell Ave. in Hamden and always think of the mural every time I pass by. It was one of a kind.