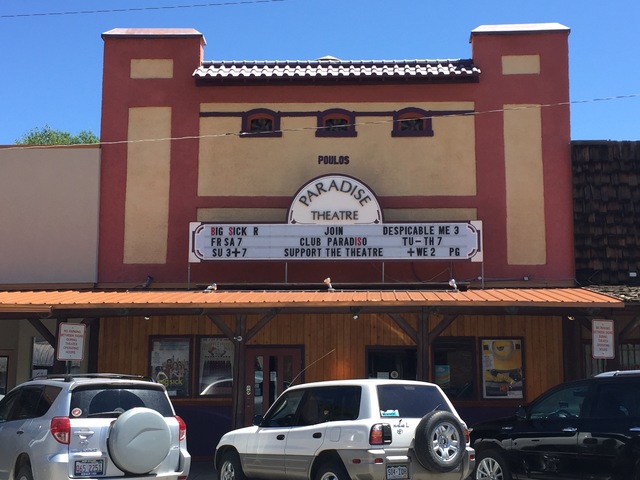 This is a sweet little one screen theatre, built in 1925 and closed during the 80’s it was revived in the 90’s. Simple and quaint decor. Large stage and dancefloor directly in front of the screen and great acoustics lend itself to concerts and plays.

Located in the still kept secret orchard community of the North Fork Valley on the western slopes of the Rocky Mountains. A great town made even better by this gem of a theatre that shows first run movies, independent films and hosts concerts periodically.

The Paradise has a new web site.

Paonia had a movie theater at least as early as 1916, when the town, but not the name of its theater, was mentioned in the January 22 issue of The Moving Picture World. The item said that the house suffered poor business when the roads were bad, but prospered when farmers from the surrounding area could get into town.

This article from the September 10th, 2014, issue of The North Fork Merchant Herald gives a few facts about the Paradise Theatre on the occasion of its 86th anniversary and reopening under the control of the non-profit organization Friends of the Paradise Theatre. The house had been renovated and digital projection equipment had been installed.

The Paonia Theatre was built by Tom Poulos (thus the name on the facade above the marquee) and opened on October 5, 1928. The 86th anniversary was commemorated on October 4, 2014, with a showing of Cinema Paradiso.

For those who might be interested, Tom Poulos wrote several capsule movie reviews for the “What the Picture Did for Me” column of the Motion Picture Herald, September 4, 1943. Four are on page 66, and three on page 68 (scroll down.) An additional review can be found on page 40of the September 11 issue.

Assistant manager Francis Gill also added movie reviews from the Paonia. I’ve seen plenty of them in 1951 and 1952 issues of Motion Picture Herald.