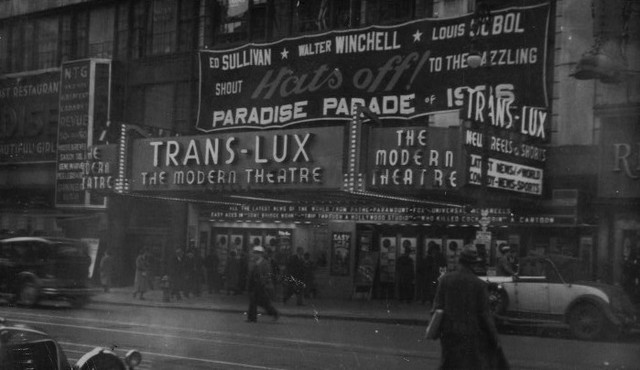 This was the second Trans-Lux to open in Manhattan, and probably the city’s very first purpose-built “twin cinema”. It occupied what had been intended for retail space in the new Lefcourt (soon Brill) Building on the west side of Broadway between W. 49th Street and W. 50th Street. The Trans-Lux Modern Theatres had two small auditoriums (with 210 and 161 seats), each with its own boxoffice and turnstile entrance, and sharing a wide marquee. It first opened on May 16th, 1931, with one auditorium showing mostly newsreels and the other presenting only shorts and cartoons. The programs lasted about 45 minutes, with an admission charge of 25 cents at all times. The patented Trans-Lux Rear Projection System was used.

In the wake of the Depression, the twin cinema failed to prosper. Its weekly operating “nut” of $6,500 required an attendance of 26,000 just to break even, and that number soared to 43,333 when cut-throat competition among Broadway theatres forced a price cut from 25 cents to 15 cents. The Trans-Lux struggled on until 1937, when boxing champion Jack Dempsey and his millionaire business partner, Jack Amiel, became interested in the site for a branch of the nearby Jack Dempsey’s Restaurant (Eighth Avenue and 50th Street, opposite Madison Square Garden). All of the Trans-Lux’s facilities were removed from the space, which was converted into Jack Dempsey’s Broadway Bar and Cocktail Lounge.

With help from money received for its sale of the lease, and using some of the seats and equipment from the twin cinema, Trans-Lux built a new, single-screen newsreeler a block south at 1607 Broadway. Known as the Trans-Lux Broadway Theatre, it began to prosper with the easing of the Depression and the public’s dependence on newsreels for graphic coverage of local, national and world events. That theatre is listed here as the Grand Pussycat Cinema, a name taken when it switched to adult movies in the 1980’s.

I am doing some research into early twin theatres and am interested in seeing the images of this theater that Warren G. Harris posted back in 2005. Unfortunately, those links do not seem to still be operative. Warren, if you are still around, do you still have or have access to those images of the Trans-Lux twin theatre?

If you’re interested in early twin theatres be sure to check out the Bexley Theatre in Bexley, Ohio, built in 1935 and unfortunately demolished in 1997.

I’ve checked out the Bexley Theatre page but information on that one seems to be scarce, apart from the couple of exterior photos that are linked to in the profile. Any additional information (especially about citable sources) about the Bexley would be most welcome as well!

Christofer, Warren has not posted in a long time now. Most of his photobucket links have not worked in the last year or so. You might find a shot or two under the Trans-Lux 49th. Street Theatre. People for the longest time mixed the two houses up.

Christofer; One of the earliest examples of a purpose-built twin cinema was the 1930 built, Twin Regal Kinemas in Manchester, England. UK.
/theaters/2679/

The earliest purpose-built twin cinema to go into operation that I know of was the Duplex Theatre, Detroit, Michigan, which was opened in 1915. The Duplex was apparently too far ahead of its time, as it was closed in 1922. A link in the second comment on the Cinema Treasures page fetches a page with several photos and a floor plan of the theater.

Detroit got a second twin theater a few years later, when the Catherine Theatre (later the Carver Tehatre) was twinned.

Not purpose built, but a conversion of a confectionary factory, Gale’s Bioscope Show opened as a twin screen cinema in Canning Town, London, UK in 1908. It was destroyed in a fire in 1909. /theaters/28119/

Grand opening ad in the photo section for this cinema.

The company that owned this theater still exists to this day and trades on the OTC markets as TNLX.