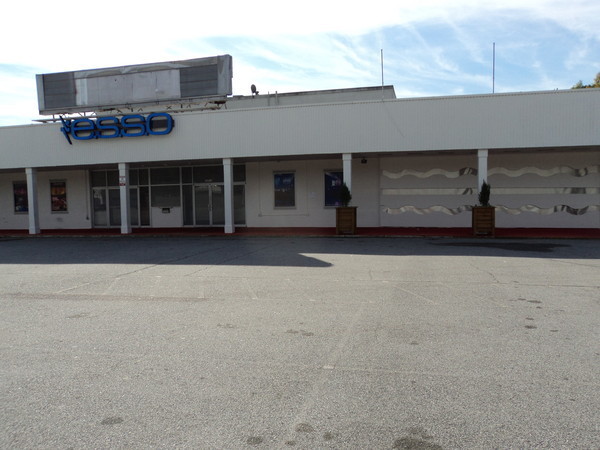 The Atlantic Theatre was opened by H.B. Meiselman Theatres on June 5, 1963 with Bob Hope in “Call Me Bwana”. It later became part of the Bailey’s Theaters circuit and operated until 1968. By 2012, it was in use as a nightclub. It was demolished in 2018.

Here is a picture of the Atlantic Theater now.
www.flickr.com/photos/jfb57/4739873289/in/photostream/

This theatre is now a popular night club.

This was opened by H. B. Meiselman theatres on June 5th, 1963. Grand opening ad in the photo section.

This theater is now demolished. A Floor And Decor now occupies this spot.

So, the Atlantic Theatre is now demolished! As someone once wrote, “Living in Atlanta means watching your past being hauled off in a dump truck!” Well, I suppose it was about time.

First, a question: Jessie, has the entire strip been leveled and hauled off in that dump truck (thanks Doug Monroe for that amusing as well as depressingly accurate saying) or has the building just been gutted and reconfigured. Just curious as either way it counts as demolished.

Second, I notice the name of the Bailey Circuit listed as a former operator. I think this is an error. Bailey was a long time operator of what was then known as “Colored Theaters.” While some of its former locations might have still been around and possibly still operating, by 1963 the company was probably gone. They were certainly out of the new theater building business.

Third, this place is obviously a Meiselman build. I do not know the order they were built, but the Cherokee was first followed by Toco Hills, Belvedere, and this one. Inside they were all alike and Atlantic and Cherokee were identical from the outside. Looking at the picture that is currently at the top of the page I could not tell which was which. Check the pictures on the Cherokee page and you will see what I mean.

EFC operated Cherokee and Atlantic for their entire runs closing this one about 1968 and Cherokee in 1976. However Toco and Brlvedere soldiered on for many years under a number of different operators.

Well, I haven’t been in Atlanta since 2003. At that time what was once the Atlantic Theatre was still standing. Frankly, it was depressing to see it. Of course, Meiselman built the theatre & operated it for the first several years. As I understand it, Bailey acquired it. They still operated the Glen Theatre in ‘63 –'64. Honestly, I was never aware that Bailey was ever in the new theatre business. Of course, I could be wrong.

I never understood why Meiselman built the theatre in that location. By 1963, the eastside of Atlanta (which included Kirkwood & East Lake) was changing rapidly. Black families were buying houses along Boulevard Drive, east of Kirkwood. By 1965 they were moving further east through Kirkwood and into East Lake. The demographics were changing so quickly that I never believed that the Atlantic Shopping Center would be a successful location.

As Doug Malone also wrote, “Nothing ever lasts in Atlanta.” Sad but true.

In an example of how you can see things come full circle if you can hang around long enough to see it happen, there is a brand new state of the art movie theater now open only a couple of blocks and 60 years removed from the days of the Atlantic Theater.

This area was built up during the pre and post WWII years as a working class neighborhood surrounding the mills of Cabbagetown. When the mills closed the neighborhood started going downhill as described in some of the previous comments. At the turn of the century the area around Little Five Points started to boom and development started to push south into this area where land was cheap and available and there was little regard for what little evidence remained of the Battle of Atlanta which was fought here in the summer of 1864.

Currently this neighborhood resembles the many other intown areas that are being revitalized, or gentrified depending on your outlook, with million dollar homes going up alongside one hundred year old frame houses. Along Memorial Drive fancy new developments and shopping centers are going up alongside the light industrial businesses which have remained here through the years. Just west of this old theater site, near the intersection with Moreland Avenue is the swank looking Madison Yards development.

Among its tenants is a brand new AMC 8plex. It has been over 30 years since something as small as an 8 was built in this town (GCC Hairston 8 in 1988), but some sanity seems to be returning to the theory of how many screens are enough to the point that many of the Regal and AMC megaplexes have mothballed entire wings thus reducing the auditorium count. This Madison Yards 8, not to be confused with the old 60’s era Madison Theater across I-20 in East Atlanta, seems to have all of the bells and whistles regarding sound systems and digital projection. There was a nice set of pictures on the Cinema Tour FB page but they have been removed. While visible they seemed to show nice stadium seating houses typical of new builds and remodeling of recent years.

Hopefully AMC will be able to make a go of that location. The nearest competitors are the Plaza on Ponce and the Starlight 6 Drive In down Moreland and none of these three are exactly appealing to the same type of moviegoer.

Since I haven’t been in Atlanta in nearly 20 years,the Madison Yards development is completely new to me. I’ll be very interested to see it the next time I’m in town. I wasn’t optimistic that anything would revitalize the east side of Atlanta. Having grown up in East Lake, I found the Eeast side to be frankly depressing. Hopefully, that is changing.