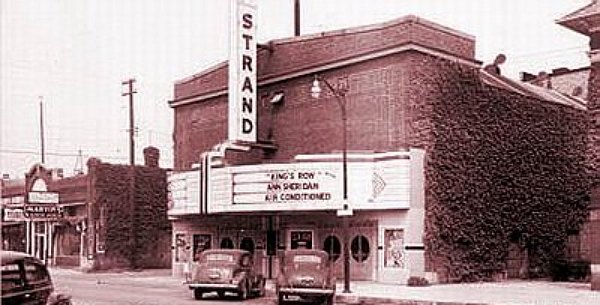 The Strand Theatre is located on Superior Street at Gratiot Avenue in downtown Alma. It was opened as a 900-seat single screen movie theatre in 1920. In 1960 a fire destroyed the balcony and when it reopened in had a reduced capacity of 500-seats. It is now used for live entertainment.

This article is dated 11/7/60. The total loss comment was apparently premature:

ALMA (UPI)â€" An early-morning fire destroyed Alma’s only movie house, the Strand Theater, today with firemen fighting the blaze for more than four hours. Alma Police Chief Robert V. Reed said the blaze was discovered by a newsboy picking up his papers in front of the theater at 4:28 am. The newsboy ran next door to the city hall where the police station is located and shouted, “Mr. Reed, there’s a fire at the Strand.”

Reed said the theater closed at 9 p.m Sunday night, almost 7 Â½ hours before the blaze broke out. He said the fire apparently started at the rear of the building and spread rapidly. The roof collapsed and the front of the building caved in. “I’d say it is a total loss.” Reed said “The theater is owned by a Mrs. Cassidy of Midland. But we understand she is in Chicago now and we haven’t been contact her for a loss figure.”

Reed said there was no damage to the city hall or other nearby buildings. One firemen was overcome by smoke and was hospitalized.

The Gratiot County Players web site has several historic photos of the Strand, plus one of another movie house, the Alma, which it says was earlier called the Idle Hour Theatre.

A 1917 publication called Michigan Film Review mentions both an Idle Hour Theatre and a Liberty Theatre operating in Alma at that time.

A September 8, 1961, Boxoffice item contradicts some of the information in the 1968 item I cited in my comment above. It says: “A. Carl Schmidt of Hillsdale is completing construction on a new Strand Theatre at Alma on the site of the one destroyed by fire last November, and will open October 1. The new house will have 800 seats, compared to 900 in the destroyed house.”

From 1942 a photo of the Strand Theatre along with Alma’s classic city hall building.

Boxoffice, April 30, 1962: “The sale of five theaters … to new owners was announced by William Clark of Clark Theatre Service, who is taking over the buying and booking of films for all five. The new owners and their acquisitions are: … Keith Musser, Strand at Alma, recently rebuilt following a fire by A. Carl Schmidt”

Here is an item from Boxoffice of October 1, 1938: “Bennett and Straight, theatrical architects of Dearborn, Mich., are taking bids for the remodeling of the Strand Theatre for William A. Cassidy circuit at Alma, Mich. New marquee, front, and lobby, as well as other alterations, are planned.”