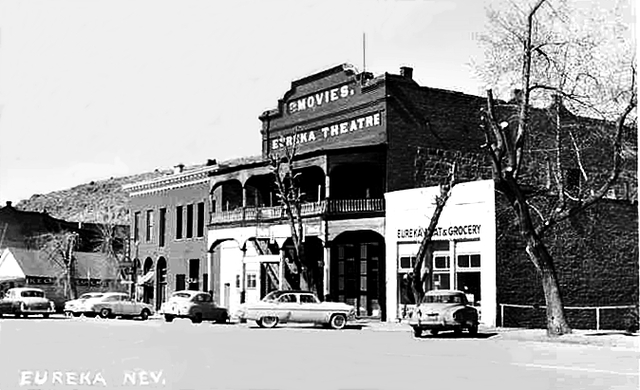 The Eureka Opera House was opened in 1880 on Main Street, built on the site of the Odd Fellows Hall after it burned down in 1879. Besides live entertainment, the Opera House was host to balls and community gatherings. In 1915, silent movies began to be shown and by the 1920’s, the Opera House was renamed the Eureka Theatre, serving as a full-fledged movie house. The theatre closed in 1958.

Restoration of the building occurred from 1990 to 1993, and it was reopened as a convention center, meeting hall, venue for community events and the arts. The original name of the Eureka Opera House was also restored.

The Eureka Opera House in Eureka is listed in the 1897-98 edition of the Julius Cahn Official Theatrical Guide. James G. Lucey was the Mgr. and there were 500 seats. The theatre was on the second floor, had a stage 21 feet deep and was illuminated by coal oil lamps. Professor Felix Rice was leader of the house orchestra which had 2-plus members. Local hotels were the Jackson House and the Bureau Hotel. The Eureka Sentinel was published every Saturday. The railroad was the Eureka & Palisade RR. The 1897 population was 1,500.

Circa 1956 photo added courtesy of AmeriCar The Beautiful Facebook page.