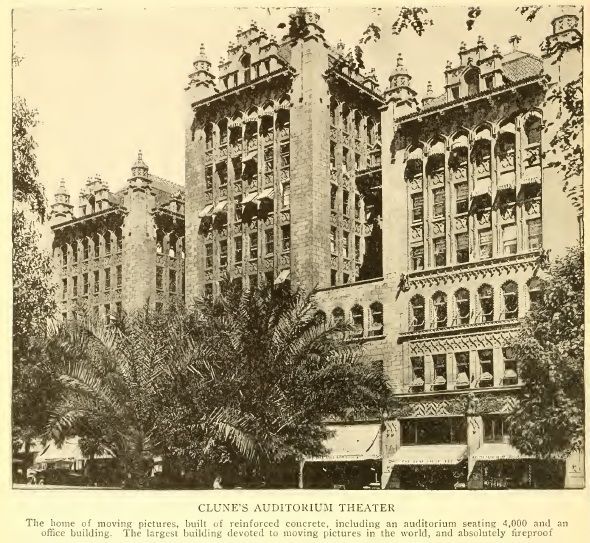 Many movie palaces have become churches, but Clune’s Auditorium, was a church which became a movie palace. Built on the site of Hazard’s Pavilion, a barn-like hall erected in 1887, the Temple Auditorium was intended from the beginning to serve the dual purpose of housing the Sanctuary and other facilities of Temple Baptist Church, and providing the growing city of Los Angeles with a proper venue for various entertainments and civic events.

The Auditorium Company hired architect Charles E. Whittlesey to design a suitable structure, which would include the auditorium itself, two smaller halls, and a nine story office block. He and civil engineer C.R. Harris created a building with a Spanish Gothic exterior and a vast auditorium with a simplified Art-Nouveau interior which was greatly influenced by Louis Sullivan’s Chicago Auditorium. The construction techniques they chose were the most advanced of the era, and, at the time of its completion, Temple Auditorium was the largest reinforced concrete structure in the world.

The 2700 seat main auditorium featured a balcony with a 26 foot cantilever, one of the first large balconies ever built without columns to support it, giving the rear rows of the orchestra floor uninterrupted views. Above the vast hall was a sky-lit dome with a clear span of 112 feet. Along the Olive Street side of the auditorium was a foyer with 84 feet of exit doors, allowing a capacity crowd to exit the building in under three minutes. The concentric rings of the proscenium were decorated in Sullivanesque style and studded with electric lights. Concealed behind and above them were the 6000 pipes of the theatre’s organ.

The Auditorium opened on November 7th, 1906, with a performance of “Aida” on the largest stage in the west. It was not until 1914 that the Auditorium was leased by local impresario William “Billy” Clune and it began its brief career as a movie theatre. It was in fact then the largest movie palace west of New York and, under Clune’s management, pioneered many of the features that would later become characteristic of the greatest movie palaces of the silent era, including the use of elaborate prologues featuring music and costumed dancers. For the premier engagement of D.W. Griffith’s “Birth of a Nation”, Clune engaged a full orchestra to play the score for the movie.

The house remained Clune’s Auditorium (often referred to in Clune’s ads and publicity releases as “Clune’s Theatre Beautiful”) for five years. In 1920, Clune’s management of the Auditorium ended, and it once again became a venue for live performances and, of course, the church services, which had actually continued to be held throughout the hall’s period as a movie theatre.

The Auditorium Building was remodeled in the Art Deco Style by Stiles O. Clements in 1938, and during a later remodeling, the interior of the Auditorium itself was given a bland interior with false walls and a dropped ceiling. Plans to restore the interior to its original grandeur were undertaken in the early 1980s, but they were not carried out. Instead, the building was demolished in 1985 to make way for a large office building project which then also failed. The site of the first great movie palace in the west became a parking lot.

This is from a 1938 article about the planned renovation of the theater:
http://tinyurl.com/dj8r22

Hi – I recently purchased a program that says: Auditorium Los Angeles, Sparks M Berry Manager. On the inside it says: Auditorium “Theater Beautiful” only fire proof theater in the city – program published by T. Newman, 204-207 Mason Opera House. On the back there’s an ad: After the Theatre is over dine at The Angelus Grill

Do you think this is the same theatre to which you are referring here? I don’t know the year but the date was Wednesday 4/24 and the play was: The Confederate Spy

To belatedly answer Heidi DD’s question: Yes, I’m sure the program you have is for this Auditorium, before Billy Clune took over its operation. Sparks Berry was manager of the Auditorium during its early years. It seems likely that the April 24 performance in your program took place in 1907. See the newspaper item in the right hand column near the bottom of the page here.

LA Times reports that the development of this parcel has been delayed due to the recession. Not much of a market now for a luxury hotel and condos as planned.

Here’s a 1920 photo of Pershing Square (with actual trees!) and the Auditorium.
View link

And while I’m at it, here’s updated links for the other photos from dead USC links above.