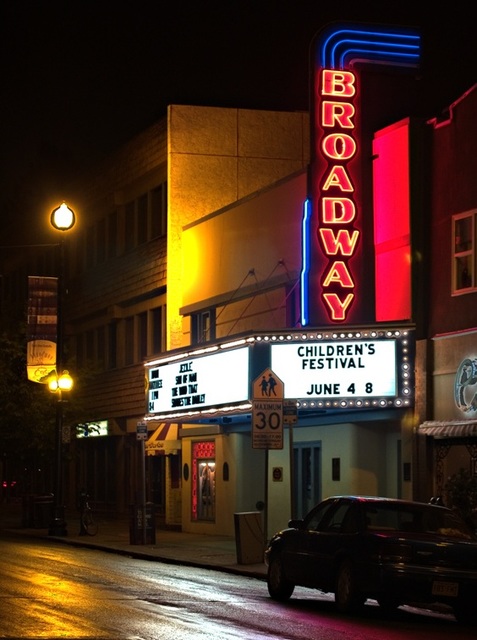 This is the place I saw “A Man and A Woman”.It is a nice neighborhood type house.I’m so glad it survived,so sad the downtown places did not.I thought of it as the Saskatoon version of the Grandin.I was in Saskatoon for the summer months of ‘67.The green trees were quite lush and the little city gave off a great ambience.

If you go all the way thru the series of pics,you’ll see some interior shots too.Also see a bit of the funky place Saskatoon is.Thank you Mr.M.

Here is a b&w photo:
http://tinyurl.com/y8dd5al

This opened on December 5th, 1946
small ad on the bottom right of this page at
View link

Some other details about the Broadway: for much of the 1970s it was an adult-movie theater, playing the R-rated softcore that passed for porn in those days. It was a pretty rough-and-tumble place. Oddly I recall it being the first place I ever saw a movie at as at one point they played The Love Bug (the Disney film), circa 1973-74. By the 1980s, it had become a respectable venue for alternative cinema and it also began hosting events ranging from concerts to appearances by the likes of James Doohan and Graham Chapman. Since the 1980s it has also been home to a long-running weekly improv theatre event called the Saskatoon Soaps. Last I heard the Broadway was attracting criticisms for having outdated equipment, but I don’t know if that’s been resolved.