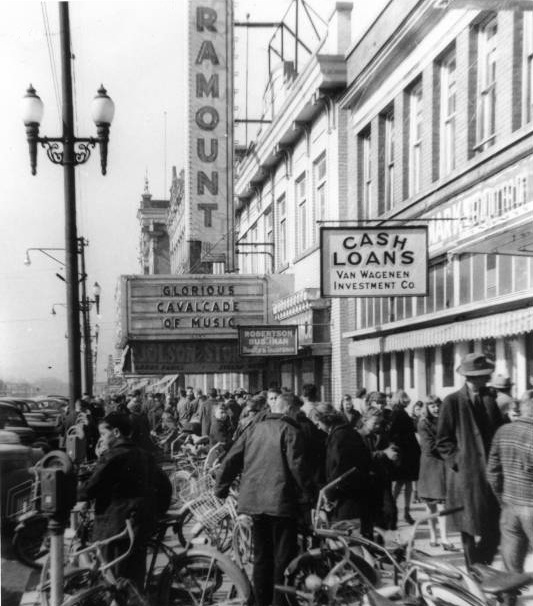 The Columbia Theater was opened on July 8, 1914. On March 14, 1927 it was renamed Paramount Theatre. By the early-1940’s it was operated by Paramount Pictures Inc. through their subsidiary Tracy Barham. This was the nicest of the three downtown theatres in Provo during my college days of the 1960’s. It was no palace, but felt more like a “real” theatre than the Academy Theatre around the corner, which was a preview of the mini-warehouse school of mall theatres, ambience-wise. Seems like it had a balcony. New multiplex facilities killed this one too.

I was the manager of the Paramount in 1977 and did some research in at the Provo library, formerly just up the block. The following is not necessarily in chronological order:
Started out in 1914 as the Pantages Theater (I think). Live performances were given, there was an orchestra pit just in front of the stage (it had been filled in with concrete prior to my time there, but identifiable). There were box seats located to either side of the stage which had been torn out prior to my time but identifiable by the scars on the walls. There were painted backdrops rolled up on the lowest catwalk backstage. To the left (west) side of the auditorium were dressing rooms. It was a Publix Theater for 20-30 years, then a Fox (?), then an ABC Intermountain, a Plitt when I was there. Not sure who had it was it was torn in late ‘04 or early .05

Another memory. Up in the projection booth, there was a metal box on the rear wall, some sort of an electical connection box or maybe a fuse box (it’s been too long for me to remember). Pull the metal cover open, and someone had written inside, in pencil, (I forget the exact date it stated) “Sound comes to the Paramount, 12/??/29.” I’ll bet that a BIG night that night.

When was the horrible “modernizing” of this theater carried out??Destroyed the character ,for sure.

The NRHP nomination form for the Provo Downtown Historic District says that the Paramount Theatre was built by John B. Ashton in 1914, and opened as the Columbia Theatre. The house became the Paramount in 1927.

This opened on July 8th, 1914 as Columbia and became the Paramount on March 14th, 1927. Both grand opening ads posted.