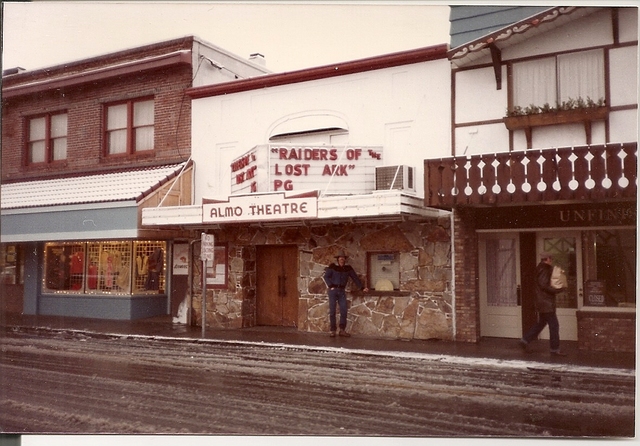 The Almo Theatre was opened in 1924. My great aunt owned it in the 1930’s/1940’s (Bell Jensen) and it was owned by the Lilquist family after that, until it closed in the 1980’s. A very small theatre with a single, center aisle. There was a little balcony that had a lily pond with fountain in the 1970’s (unsure if it was original). You had to be 18 to sit in the balcony. The lobby was tiny with restrooms, a small snack bar and the very narrow, steep staircase to the balcony. The exterior had been updated, probably in the 1960’s, with stone veneer.

The Almo Theatre closed January 15, 1987. It was renovated for use as a dress shop. The exterior stucco was restored and original second floor windows were opened up. The interior was completely gutted. The building is became an antique shop and by 2017 was a jewelry store.

I forgot to add that I once had 30 professional cinema seats but gave them away. However, I still have a digital projector, audio amplifier with Dolby 5.1 surround sound, two sets of small stage traveler curtains, a big electronic message board, framed classic movie posters and a ton of bric-a-brac cinema goodies.

Hey folks… what are we waiting for?

The Almo Theater (theatre) was built by one J. H. Almos, a local boat builder. Its first sound was phonograph records synchronized (mostly) with the picture. I, and many of my friends (Don Hood, Vernon Herrick, et al, were projectionists when the theater was owned by George B. (Ben) White, Bill Haugen, and then Joe Lilquist. Its structure is still in place but no longer a shop of any kind. I started in the nitrate film days and can still smell the stuff. The whine of the DC generator for the arc lamps, the sputtering of the copper-clad arc rods, the smell of film cement using the Griswold splicer, adding cue marks to make changeovers…. etc. A world long gone. The curtain for the screen was hand-cranked from the ceiling of the projection booth, and many a hat and coat went sailing down the side of the auditorium when the curtains opened and someone had hung their garment on the cable.

The Regal “Poulsbo 10” is probably what forced this theater out of business.

The picture (RAIDERS…LOST ARC on the marquee) shows Poulsbo Wash native, the late Ken Williams, out in front of the theatre in 1981-82. This was Ken’s boyhood theatre and he spent many happy hours there.

I installed the projection equipment and opened as lead projectionist the General Cinema Kitsap Mall 6 (now 8 screens) In Silverdale, WA in January of 1987. As I recall, the Almo’s last day of operation was our opening day, January 15th. The two theatres were less than 12 miles apart and the new shopping mall in Silverdale had stolen away much business from the surrounding area. Downtown Bremerton became a near ghost town for a few years after the mall opened.

The Almo Theatre was in operation by 1925, when this item appeared in the May 2 issue of The Moving Picture World:

“A. Swan of Silverdale, Wash., has acquired the Rex, Poulsbo, and is having it remodeled. This will furnish competition to J. M. Almos' Almo Theatre.”

J. M. Almos was still operating the Almo in 1942, although this item from the January 2 issue of The Film Daily misspelled both his name and that of his theater:

“Contract Is Let For New Theater In Northwest

“Poulsbo, Wash. — J. Alamos has let contract for a new theater here to take the place of the Alamos Theater. Work will be started early this year.”I’ve found nothing later in the trade journals indicating that Mr. Almos completed his new theater. The timing was inauspicious. The Federal government was soon to place restrictions on all construction that did not contribute to the war effort, and the only way a new theater could have been built in Poulsbo at that time is if it was already well under way when the restrictions were established, or if the local population had grown much larger as the result of the establishment or expansion of a nearby military base or war-related industry.

The January 11, 1944, issue of The Film Daily reported that T. E. (a later item says T. F.) and G. B. White (the latter mentioned in an earlier comment by Arthur) had taken over operation of the Almo Theatre from J. Almos.

The Almo Theatre opened in 1924. As of 2017 the building is currently occupied by Blue Heron Jewelry. In the Poulsbo Heritage Museum we have three of the original wooden, unpadded seats which were replaced with padded ones in 1931 when the theater was remodeled and a new screen and speakers were installed. We also have the large “ALMO THEATRE” sign, visible in the picture, hanging on our wall.

Retail at the present time.

Yup! Still occupied by Blue Heron Jewelry as of August 2022

An interesting side note that hasn’t been mentioned is that for several years before opening the Almo in 1924, Mr. Almos had been showing movies on Saturday nights at the Sons of Norway Hall.