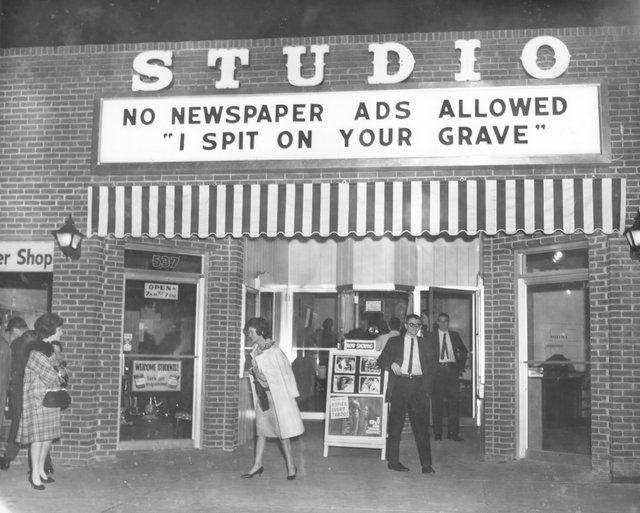 The Studio Theater was on the West side of S. Highland Street in what was sometimes called the “Highland Strip” area near Memphis State University. MSU had been founded in the nineteen-teens as West Tennessee State Normal School. Normal School was a term used at that time for a teachers' college. The whole area/suburb was called Normal for many years and the Studio Theater was originally named the Newman Theater when it was built and opened in 1927. It later becoming the Normal Theater. The joke in the 1960’s was that “Abnormal” would have been more accurate.

It was renamed the Studio Theater on June 27, 1962 when the Art Theater Guild took it over. It was a plain, barnlike auditorium with no balcony. The marquee was flat against the wall above the very narrow entrance and the lobby opened up inside. The Park Theater was about six blocks to the South at Park and Highland, and the Plaza Theater was about the same distance to the North in Poplar Plaza at Poplar and Highland. Both are listed on this site.

I first saw the Studio Theater in 1963 while a student at Southwestern at Memphis (later renamed Rhodes College) and the first movie I saw there was “David and Lisa” with Kier Dullea and Janet Margolin. Late in my sophomore year I went to work for the Art Theater Guild tearing tickets at both the Guild Theater and the Studio Theater. I used to bicycle about seven miles from the Southwestern area to work at the Studio Theater and then back after the show, usually getting home well after midnight. I narrowly missed getting arrested there in 1967 when the vice cops busted a porno (excuse me–art) movie; I think it was “I, A Woman” with Essy Persson. I arrived to tear tickets at the second show just as they were locking the place up and carting the previous shift off.

The Guild Theater showed more legitimate foreign and art movies but the Studio Theater was a little steamier, with such classics as “The Dirty Girls” and “Mondo Freudo”. On the other hand I also saw “Darling” with Julie Christie, “The Hill” with Sean Connery, and “King Rat” with George Segal there. While I was in the Air Force 1967-72, the Studio Theater and the Art Theater Guild were involved in a long and expensive court fight over an art/porno movie called “School Girl”. They eventually won, and it resulted in a general loosening of all the Memphis movie censorship laws. It might have been a hollow victory, though, because when I returned to Memphis in 1973 it was well into decline, showing such double features as “Blacula” and “The Thing with Two Heads” and it closed in 1974. On July 18, 1975 it reopened as the Movieland Theater, and was screening the X rated “Oh Calcutta”.

Eventually the Art Theater Guild pulled out and both the Guild Theater and the Studio Theater were taken over by another group which obtained beer licenses and reopened them as cabaret or lounge theaters. By that time I was a grad student at MSU and living on Mynders Avenue just across the street from the Studio Theater so I could walk over and have a few beers while watching the movie and didn’t have to drive home. Later I moved back across town to the Southwestern area and lost track of the Studio Theater which had become the Memphis Entertainment Center from May 2, 1980. It was still operating when I left Memphis in 1983, renamed Highland Theatre from July 16, 1982, still screening adult movies. It closed as a cinema in 1993.

It became the concert room for Newby’s bar next door, which closed in 2014. The tiny, one-person box office still exists. On January 9, 2017 it reopened as The Bluff, a Cajan restaurant and music venue.

i remember going to The Movie House when it was open on Highland Strip….cheap beer and cheap admisson

Newby’s, the bar occupying the old theatre building, just closed. The Loeb family is poised to acquire the building for renovation. There isn’t anything left, really, except one display case saved from Loew’s State.

In the mid 1980’s, this building became a Christian-themed music entertainment venue called, “The Highland Crossover.” In the late 1980’s, this building became the comedy club, “Sir Lafs-A-Lot.” Comedy clubs were booming nationwide at the time, and Sir Lafs-A-Lot did tremendous business for a few years, until the fad declined and they closed in the early 1990s. Many, many future big names in comedy and TV appeared on stage there. Newby’s restaurant (to the left) later acquired the theater building and used it as a showcase for live bands, building a short connecting hall across the sliver of an alley that separated the buildings. A recent news article indicated plans to reopen the closed Newby’s restaurant and demolish the theater building, creating a parking lot in its place.

After going by the old Quartet this past Monday (26 Oct, details posted under the Quartet) I went down Highland and drove by the old Studio. The entrance is now boarded up with plywood: the theater entrance and box office are sealed off, but the two flanking storefront doors are not blocked.

The old Studio has been gutted and transformed (probably complete by now) into “The Bluff,” a Cajun restaurant and music hall. The post includes several pictures that brought back both fond and painful memories. They will still have a stage in the “Music Room”/auditorium, and the alley just outside the North exit door where I used to park my bike will become an outdoor patio.

Wasn’t this theater also a comedy club in the late 80’s called Sir-Laughs-Alot?

This became the Studio as the Art Theatre Guild takes it over on June 27th, 1962 and closes in 1974. It reopens on July 18th, 1975 as Movie House and is renamed Greater Memphis Entertainment Center on May 2nd, 1980. Grand opening ads posted.