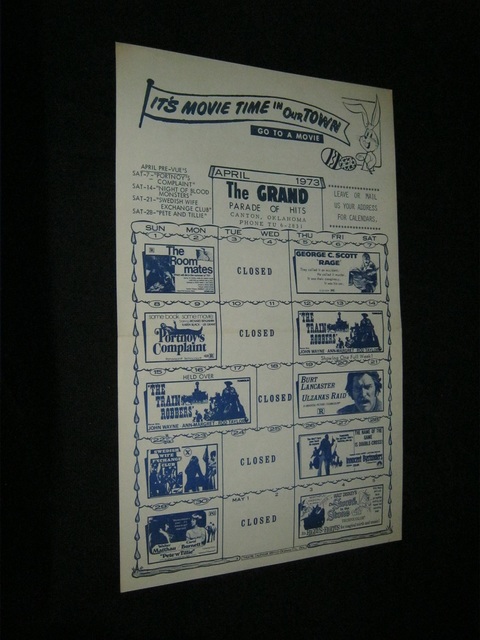 The Grand Theater is currently undergoing restoration. It will be used as a community arts center upon completion of this undertaking. So far, the windows have been replaced, some new drywall installed, new seating is underway as well as a general overall renovation. The progress is being completed as funding allows.

Canton is much like most other small plains towns in the sense it is suffering from depopulation making it difficult to complete such projects for many reasons.

The Grand Theater is a tall, red brick structure featuring a wonderful stylized bulb lit marquee topped by a starburst. This striking marquee vertically spells out “Grand” and is highlighted with gold, green and red. The marquee is often lit making it the focal point of this small downtown. More information concerning the Grand’s history will be posted as soon as it becomes available.

This is a recent street view of the Grand Theatre, from google maps,
http://www.panoramio.com/photo/16952923

Here is another view of the Grand Theatre taken from Broadway & Walnut. Wonder if the Movie Poster Services was once a theatre too?
View link

Grand Theater photo added to this site. While boating on the Canton Lake in 60’s, went into this town and saw a movie playing at this theater. It was the only theater in Canton and it was somewhat small but, played current first run movies at the time..Canton area is interesting!

I spent part of my youth growing up in Canton (E. Pine Street,½ block east of Broadway) where my dad was the high school Vocational Agriculture teacher. The most memorable thing about the Grand theater for me was when the phone company, upon converting from hand crank phones to dial phones, used the theater as the place where all the old phones wound up, and they gave them away to kids like my brother and I (Geez, do I sound prehistoric by saying that?). It’s ironic that only after I had many years designing movie posters (Ai, Batman Begins, Dances with Wolves) that I discovered that place across the street from the Grand that rented(?) movie posters.

Heh Tombro, which versions of posters did you design? What do you mean they rented posters across the street? Did you see the calendar photos I posted?

The May 30, 1966 issue of BoxOffice reporter that owner/manager Bob Smith notified his patrons via the local newspaper that the Grand would close for a week for remodeling. “We are going to remodel the foyer, the concession area and part of the outside.”